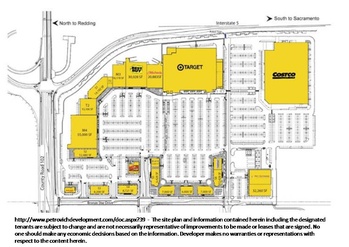 Woodland Gateway is a retail center project from the Petrovich Development Company on the Eastern boundary of Woodland.

Original concept and preliminary planing for the Woodland Gateway commenced in 2004 (or possibly earlier). On 23 May 2006, the Woodland City Council approved the Woodland Gateway project by unanimous vote. Construction officially began in a groundbreaking ceremony on 27 April 2007, and spaces were available for lease beginning in the Spring of 2008. Costco was the first business to be completed and opened February 22nd, 2008, with Target opening on July 24th, 2008. Construction has begun on a handful of buildings, including those housing Best Buy, Michael's, and Red Robin.

Like most major development projects, Woodland Gateway has been the subject of several controversies throughout the planning and construction phases. Some of these controversies include:

On 05 March 2005, Yolo County sued the city of Woodland for deficiencies in the Environmental Impact Report (EIR). A major portion of the lawsuit focused on the proposed auto mall. The lawsuit was settled in January 2006, which allowed the project to move forward, including annexation and construction.

A controversy occurred over Best Buy in June of 2008, about whether they could use their signature tilting blue wedge logo. On May 15th, the Woodland Planning Commission voted 4-3 to deny the request, as they wanted the Gateway stores to reflect the architectural history of downtown Woodland. In accordance with the Gateway Shopping Center historical design requirements, the new Target store put their circular logo in a brick tower. According to the Woodland Journal and Petrovich Development, "Best Buy is the co-tenant needed to satisfy the conditions of other leases such as Old Navy, Sport’s Chalet, In-N-Out Burger, Red Robin, Bed Bath and Beyond, Michael’s, Texas Roadhouse and Johnny Carinos Italian Restaurant1." On June 10th, the Woodland City Council voted 5-0 to approve an exception to the city's historical standard. 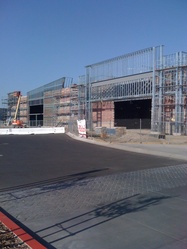 2009-03-11 01:19:09   So the Best Buy and Michaels stores are currently hiring for anybody looking for jobs. Also, I noticed signage for a Famous Footwear being placed on a building today. I would guess that they too are looking for employees. Best Buy is slated to open on the 17th or 18th of April last I heard, and Michaels will probably follow shortly thereafter. Also, the In N Out Burger is almost finished being constructed, and I would guess an early June opening for that. Is everyone else excited?? I am!!! —Jmbresci

2009-08-07 22:03:48   I've only been to the Costco a handful of times, and even the most recent trip was many months ago. And to hear there are other businesses in the area and potentially an In-N-Out Burger, I am also very excited! —AmyChow