Cropped from a still from a 1994 advertisement. 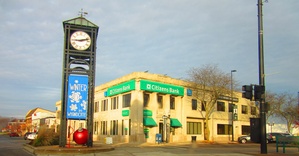 During it's entire existence, Charter Bank was based out of 3058 First Street, Wyandotte.Charter Bank began on December 15, 1933, as the First National Bank of Wyandotte, operating out of offices at 3058 First Street in Wyandotte, which still operates today as a Citizens Bank branch. After regulations that banned bank branches were lifted, the First National Bank opened it's first branch at 2517 Fort Street in 1949.

Charter Bank was acquired by the similarly-named Charter One Bank on August 9, 2002.