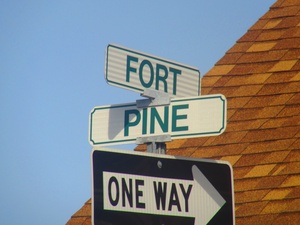 Corner of Pine StreetPrior to the construction of Interstate 75, Fort Street, along with Dix-Toledo Highway and West Jefferson Avenue, was the best way to get from Downriver into Detroit. Today, it is still a major boulevard through eastern Downriver, designated as M-85.

The road itself actually begins within Detroit proper. That portion is covered on the Detroit Wiki.

Short history of the M-85 designation

M-85 as it exists today is actually it's third incarnation, it was previously used between 1919 and 1941 in two different locations elsewhere in Michigan. This current form of M-85 came into being in 1956 extending from Gibraltar Road to Oakwood Boulevard. M-85 was then cut back to end at I-75 near Schaefer Highway after I-75 through Downriver was completed in 1967, only to be extended back up to Oakwood and then, for the first time in it's existence, east into downtown Detroit, as part of a larger series of streets around downtown Detroit being acquired by the city from MDOT and vice-versa, in 2001.

An older alignment of Fort Street, also known as Fort Road, branches off of the newer road in Gibraltar, just north of Gibraltar Road. It travels southwest of Gibraltar, parallel to Interstate 75, and goes through Rockwood before becoming Dixie Highway at the Monroe County border.

Odd-numbered addresses are on the east side of the street.

NOTE: Beginning at Goddard Road, all Lincoln Park addresses listed are on the west side of Fort Street until Lincoln Park ends at Brest Street.

NOTE: Beginning at Sibley Road, all Riverview addresses listed are on the west side of Fort Street until Riverview ends at King Road.

NOTE: All Trenton addresses below are all on the east side of Fort Street until King Road.

NOTE: The Brownstown Township addresses below are all on the west side of Fort Street until Gibraltar ends at Ostreich Road.