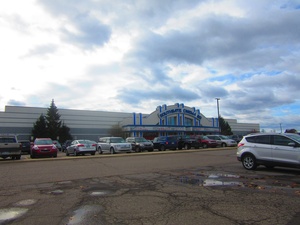 The MJR Southgate Digital Cinema 20 is a first-run megaplex in Southgate, owned by Bloomfield Hills-based MJR Digital Cinemas. They offer free popcorn and pop refills and also offer discount prices for matinee showings. It opened on November 6, 1998, and converted to 100% digital in 2007. Recent additions include a bar (which replaced the former arcade area) in the lobby next to the split stairs to the second floor (containing alternate entrances to the larger auditoriums and the projection booths) and a giant screen dubbed "MJR Epic Experience" in theater 1 (first theater in the hallway to theaters 1-10 to your left from the concession stand).

Fans as young as 10 were among those waiting in line at 3:30 a.m. this morning to rush into the MJR Theater in Southgate. In all more than 300 fans waited in line, up to four hours, for the right to be among the first to see “Episode VII” also known as “Star Wars: The Force Awakens.” The theater was showing all seven numbered installments of the franchise, skipping out only on the animated release called “The Clone Wars” that bridges the gap between the original and prequel trilogies in the saga.