Pinnacle Race Course was a short-lived horse race track on the Romulus-Huron Township border which was to be the anchor of a proposed Aerotropolis surrounding the lands around Detroit Metro Airport.

The attraction attempted to prove that thoroughbred horse racing was still alive and well in Michigan despite the establishment of the Greektown, MGM, and MotorCity casinos in Detroit.

Horse racing was once popular in the Metro Detroit area, showcasing race tracks in Hazel Park, Livonia and Northville.  In the 1990s, these racetracks began closing due to lower-than-expected patronage.  Attention began to turn to proposed casinos near downtown Detroit from which the aforementioned locations would be granted franchises in the later park of the decade.

At the same time, research was being done into looking into how best to utilize the lands immediately north, south and west of the airport, which began an aggressive expansion in the 1990s.  Although the proposed Aerotropolis was expected to generate new research and development facilities, as well as forming a true logistics hub for the area, a proposed casino and racino (a combination horse racetrack and gambling mecca) gained the biggest initial traction for development.  Promoter Magna Entertainment had two plans on the drawing board which would have transformed the area of Wick Road north of the airport, but the plans drew extreme criticism and threats of lawsuits from the Detroit casinos, as well as threats from Indian-based casino operations nearby.  These plans were eventually withdrawn.

Pinnacle Race Course, a plan independent of Magna's efforts, was then promoted for the area immediately south of the airport, bordered by Pennsylvania Road, Vining Road, Sibley Road and Interstate 275.  The plan was immediately heralded as a way to save the idea of the Aerotropolis from extinction.

With an estimated value of $350 million, the 212 acre parcel would result in 3,300 direct & indirect jobs being created.  A potential of $2.5 million in property taxes for Romulus was hoped for.  Magna Entertainment had bought the land from the county for $28 million; the company owned fourteen similar tracks around the country.

There would be three different tracks: a 1 mile turf track, a 1 1/8 mile dirt track for thoroughbred racing, and a 7/8 mile harness track.  A total of 21 barns (36 stalls in each), and a pair of three-story buildings with 52 living units were to be constructed for use as grooms' quarters.  A theater with a capacity of 2,500, plus 1,500 interactive betting machines would be included in the main complex.

Phase 2 would have been built on 72 acres, with over 675,000 square feet of mixed-use retail, hotel and convention space dependent upon needs of the market. 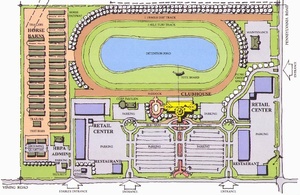 The original artist's conception of Pinnacle.  (photo from downriverthings.com)

The trail gets bumpy

Gaining approval in principle in 2007, the first phase of the site was ready by the second half of the 2008 racing season, although some specifics were trimmed down.  The grandstand, for instance, was built for only 1,000 instead of 4,000.  Despite this, the first partial season was deemed a success, highlighted by a "Michigan Sires Showcase" in the fall of that year.  Plans were then formulated for further expansion, which included badly-needed widening of the Sibley Road-Vining Road intersection.

However, what proved to be the first of many state budget slashes during the first part of 2009 threatened to put a damper on Pinnacle's first full year.  Pinnacle faced the threat of having over half its operating budget slashed by the State of Michigan, but the amount was soon restored to provide a full 2009 schedule.

The demise of an idea

In June of 2010, it was revealed that the owners of Pinnacle had not paid school taxes to Huron Township.  After much investigation, it was found the deed for the Pinnacle land had not actually been transferred from the Michigan Land Bank, so the racetrack owners were technically not bound to pay taxes on land that was not officially theirs.

At the same time, the owners were seeking lower assessment values on the buildings and grounds.  Facing more fund slashing and another shortening of its season, Pinnacle tried to push through a proposed sale of half their 212-acre parcel to the Sault Ste. Marie tribe of the Chippewa Indians (for a possible future casino), but the deal fell through because Pinnacle still didn't own the land.  In spite of the land-bank mixup, it was still ruled Pinnacle still owed taxes on the property.