SMART Park & Ride Route 830 starts out at West Road and Grange Road and runs north towards Detroit. Frequent service in weekday rush hours-but only towards Detroit in the morning and vice-versa in the PM rush. 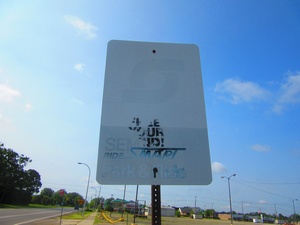 Prior to the closure of the Southgate Super Kmart, a park and ride lot was offered there.

Service began on October 30, 1978, originally continuing out to Flat Rock until they and Gibraltar chose to distance themselves from SMART in 1995 and the route was cut back to Fort Street and Van Horn Road where it ended until 2007.