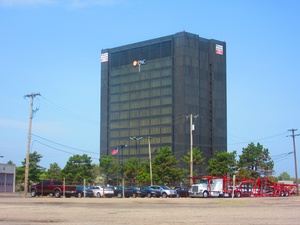 The tallest building Downriver as seen from Fort Street.Southgate Tower is located at 16333 Trenton Road, Southgate. It was constructed in 1972-73 and is the tallest building Downriver, and the tallest structure between Detroit and Toledo. It formerly housed a bank branch, which was originally Security Bank & Trust and later became First of America Bank, National City Bank and PNC Bank before closing down in 2013. As of March 2016, the PNC signs have been removed and it's future fate is unknown, though it has been rumored on Facebook that it may be torn down.