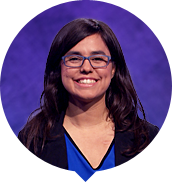 Theresa Tejada. Photo from the Jeopardy! websiteTheresa Tejada is an Allen Park project coordinator, the daughter of Matador Restaurant owners Ray Tejada and Micehele Tejada, and a contestant on Jeopardy!, starting with the December 22, 2015 episode. She emerged as the winner of that edition, beating returning champion Liz Quesnelle and Ted Johnson. As a result she will face Joe Quackenbush and Chandreyi Ghosh on the December 23, 2015 episode.

Theresa Tejada will compete on the program, which airs 7:30 p.m. on WDIV-TV. “Jeopardy!” and its host, Alex Trebek, are in their 32nd season of syndication.

The current “Jeopardy!” reigning champion hails from none other than Downriver. Theresa Tejada, a project coordinator from Allen Park, debuted on the Dec. 22 episode of the nationally syndicated quiz show, and went on to win the game with $21,599.