Sidetracks: A staple of Ypsilanti, Michigan turned into controversy hotspot

It is a staple of Ypsilanti, with its burgers and classic American menu it is quite popular. Sidetracks is a grill and bar, with their own special mix of drinks and various sandwich and bar menu food items. Sidetracks recently did a 1 million dollar renovation to its restaurant back in 2016. Popular bar and restaurant Sidetrack investing $1M in renovations - mlive.com Sidetracks has their signature burgers on their menu - which include veggie and turkey burger options. Its fries are hand cut in the store. In pre - COVID times Sidetracks had little to no controversy, but once COVID hit there have been numerous reports of workers stating that they have not been following guidelines - and going so far as to allow COVID - positive employees still work.

Workers unable to quarantine, reports of racism and homophobia

Workers have reported that they were not allowed to self quarantine - and were allegedly told that they would be fired if they did not show up to work, regardless of the positive test. Sidetrack bartender says he's been "pushed out" of his job for self quarantining | The Eastern Echo To further add onto the controversy, there is an instagram page current running titled "@boycott_sidetrack_ypsi (BOYCOTT SIDETRACK (@boycott_sidetrack_ypsi) • Instagram photos and videos), as several former staff members have stated that the owner is homophobic, racist, and have poor / illegal working practices. There have been numerous complaints from customers and workers alike who have stated that the current owners are not keen on having people of color, specifically black people in it's establishment. Others have stated that while working there homophobic and racist remarks have been made to them, or to their fellow coworkers. BOYCOTT SIDETRACK (@boycott_sidetrack_ypsi) • Instagram photos and videos 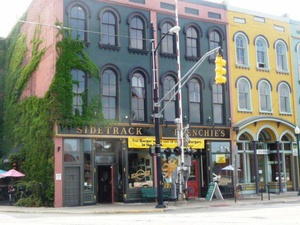