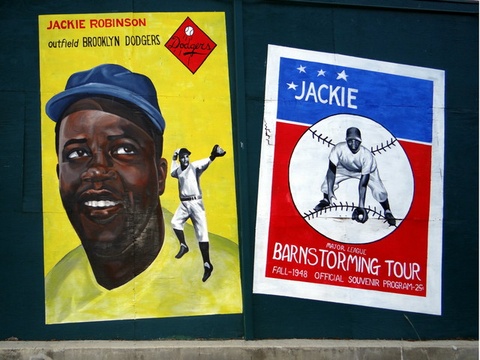 A mural at Appeal-Democrat Park commemorates Jackie Robinson, the first African-American allowed to play major league baseball in the 20th century. Photo by queerbychoice. The African-American community in the Yuba-Sutter area is smaller, relative to the general population, than in most of California. It is most concentrated at Beale Air Force Base, where 10.7% of residents are black.

Until 2005, Anna L. McKenney Intermediate School used the "Rebels" (with a picture of a Confederate soldier) as their mascot. The mascot was changed to the Mustangs by a majority vote of the students. (See Native American Communities for other offensive school mascots in the Yuba-Sutter area.)