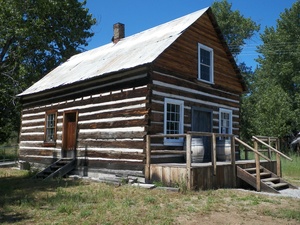 The original Beckwourth cabin, located in Beckwourth, CA. Photo donated by an anonymous contributor.
Beckwourth Frontier Days is a living history festival that used to be held annually at Beckwourth Riverfront Park Complex in Marysville on the first weekend in October. In recent years, the festival has no longer been held.

The festival was established to honor James Pierson Beckwourth, an African-American pioneer who forged what at the time was the lowest, safest passage across the Sierra Nevada Mountain Range in the mid-1800s. The trail he forged, which became known as Beckwourth Trail, ended in Marysville.

The entrance to the festival was a giant Conestoga wagon. A miniature Beckwourth Trail led throughout the festival grounds, which featured a wagon train, gold miners, Nisenan, buffalo soldiers, Chinese laborers, mountain men, and numerous horses. The various historical characters told stories and demonstrate gold panning, blacksmithing, or other historically significant skills. They also organized games or contests such as horseshoe tossing and frog jumping. There was also a reenactment of James Beckwourth's attempt to sue Marysville for going back on its agreement to pay him for improvements he made to the trail. Beckwourth never received the money, because only white people had standing to sue in the California courts.

Street musicians, cowboy poets, and craft vendors were also present throughout the festival, and many types of food were sold, including a variety of ethnic or historically significant food. Sheep dogs demonstrated their herding techniques, and children explored the petting zoo.