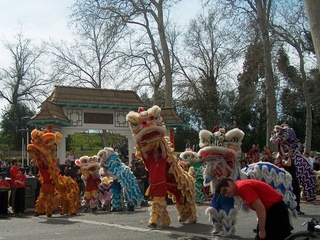 Lion dancers in front of the Bok Kai Temple at the 2009 Bok Kai Parade. Photo by queerbychoice. The Bok Kai Festival and Parade is held annually in Marysville on the weekend closest to the second day of the second month of the Lunar Chinese New Year. The Bok Kai Parade takes place on Saturday, primarily on D Street (turning east onto 1st Street at the Bok Kai Temple and ending shortly thereafter). Bomb Day is celebrated on Sunday.

Traditional Chinese lion dancers come from as far away as San Francisco to dance in the parade, and the Ben Ali Shriners from Sacramento always bring a wide variety of different contingents. School marching bands and community organizations from throughout the Yuba-Sutter area also march in the parade. 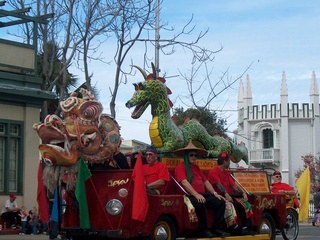 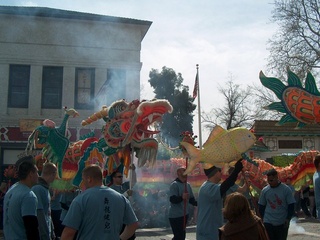 Lung Huang at the 2009 Bok Kai Parade. A tiny portion of Hong Wan Lung is visible in the background. Photo by queerbychoice. The Bok Kai parade is the oldest continually held parade in California, having been held annually since at least 1880, and believed to have been held as far back as the 1850s. It features a huge silk dragon imported from China and carried on sticks over the heads of the marchers. The first dragon, Moo Lung ("Magic Dragon"), cost more than $5,000 in the 19th century and was the largest and considered the finest parade dragon in the United States until World War II. This gold-festooned dragon was frequently sent to participate in Chinese parades all across the United States, and was exhibited at a Worlds Fair. Due to damage to the fabric, he was retired after the 1916 parade. He was brought out again for the 1930 parade, and taken to San Francisco in 1937 for a Chinese hospital charity parade. By this time, tears in the fabric had required him to be shortened from his original more than 150 feet to only 100 feet. His head is now preserved in the Bok Kai Temple.

After World War II, the Bok Kai tradition in Marysville was preserved partly through the efforts of John and Katie Lim.1 More recently, a 152-foot dragon named Lung Huang paraded from 1991 through 2009. The 2009 parade marked the premiere of the new 175-foot dragon named Hong Wan Lung, who accompanied Lung Huang in that parade. 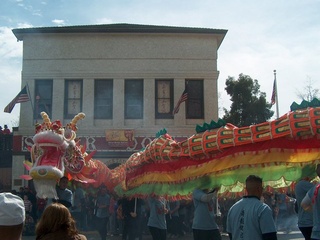 Hong Wan Lung lunges at the crowd in front of the Silver Dollar Saloon while Lung Huang circles back toward the temple at the 2009 Bok Kai Parade. Photo by queerbychoice.