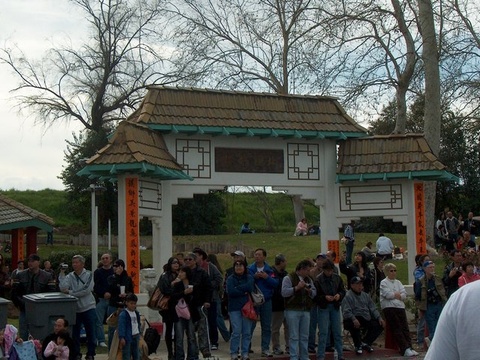 The entrance to the Bok Kai Temple during the 2009 Bok Kai Parade. Photo by queerbychoice.

The Bok Kai Temple is a Taoist temple in Plaza Park in Marysville. It is one of very few Taoist temples in the United States and the only temple in the Western Hemisphere that honors the Chinese god of water, Bok Eye. It is a California Historical Landmark and is included on the National Register of Historic Places.

The temple itself faces the Yuba River levee and is not visible from any street, because its original address was on Front Street, which no longer exists. However, the property contains an entrance arch located at the corner of D and 1st Streets in Marysville, next door to the Silver Dollar Saloon. 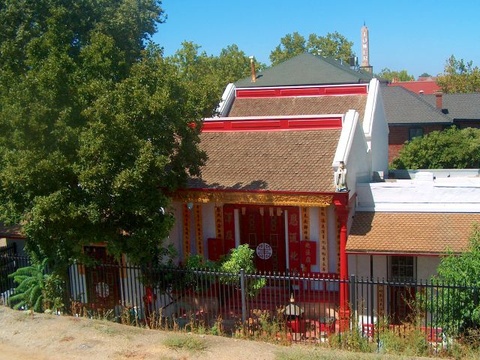 The Bok Kai Temple itself faces the levee and is not visible from any street. Photo by queerbychoice. Marysville's Chinatown was once the second-largest in the United States (second to San Francisco's), when Chinese immigrants congregated here to work in the gold mines and, in the post-Gold Rush years, to build railroads. White people were generally not willing to endure the risk to life and limb that railroad building entailed, so they tolerated the Chinese laborers' presence. Marysville's first Bok Kai Temple was built during this time, in 1852-1854, almost two blocks upstream from the current site. This temple was destroyed by a fire, and the current temple was built in 1880 by the Marysville Kiwanis Club to replace it.

By this time, the railroad work was winding down, and the Chinese laborers started looking for other jobs. Because the remaining jobs were less dangerous, white people wanted these jobs too. As a result, racist attacks against Chinese people in Marysville increased dramatically. Then the federal Chinese Exclusion Act of 1882 legalized increased racial discrimination against the Chinese, enabling local white people to drive most of the Chinese out of Marysville. Few Chinese people have lived in Marysville since, but the Bok Kai Temple still stands as a tribute to Marysville's Chinese history.

The temple is decorated with frescoes depicting scenes of Chinese culture, which are said to be quite historically important due to the fact that most similar frescoes in China were destroyed during the Cultural Revolution of the 1960s. In 2001, the temple was designated one of America's Eleven Most Endangered Historic Places by the National Trust for Historic Preservation.

The Bok Kai Temple honors multiple Chinese gods, of whom Bok Eye is given the most prominent position, in the center of the main altar. Bok Eye is the Chinese god of water and seems in Marysville to have been primarily called upon to prevent floods. Supposedly it's never rained on the Bok Kai parade in the 129 years since the current Bok Kai Temple was dedicated, because Bok Eye is considerate of the people marching in his honor. Bok Eye is also credited with having prevented Marysville from being flooded when all surrounding communities have sustained near-ruinous flooding as recently as 1997 (although this may also have a very great deal to do with the massive levees that surround Marysville on all sides, and that do not surround any of the other nearby communities).

Taoism has never been a single, unified religion. Rather, it encompasses a variety of related philosophical and religious traditions and concepts that have evolves alongside each other in various parts of East Asia over the past two millennia. However, most Taoist belief systems share the following principles.

Tao means "the way" and is generally interpreted by Taoists to refer to the flow of the universe or the natural order of things. It is associated with undisturbed nature. Te refers to the active expression or cultivation of Tao and can be translated as "integrity." Wu wei means "inaction" and is revered as a way to align oneself with Tao. It is often referred to in the paradox wei wu wei, meaning "action through inaction." Wu wei is associated with water, which yields to the shape of anything it flows over, yet has the power to carve vast canyons into stone. The Three Jewels of the Tao are kindness, simplicity, and modesty.

Whereas Christianity often views sexuality as a dangerous source of evil temptation, Taoism views it as a positive asset. Although excessive sexual indulgence may be considered dangerous, excessive sexual abstinence may be considered equally dangerous. The sexual vitality of men is considered limited, so men are encouraged to control ejaculation to preserve this vital energy. However, the sexual energy of women is considered boundless, so women are encouraged to reach orgasm without restriction.

It is difficult to estimate the number of Taoists in the world, because there are differing definitions of what beliefs constitute Taoism. Estimates generally range between 20 million and 50 million.