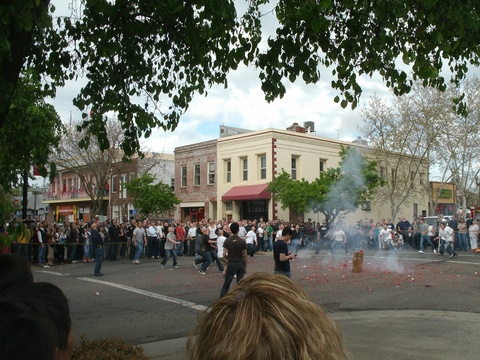 Bomb Day is celebrated annually in Marysville during the weekend closest to the second day of the second month of the Lunar Chinese New Year, in conjunction with the Bok Kai Festival and Parade. The Bok Kai parade is typically held on a Saturday, and Bomb Day is typically celebrated the following day. The main event of Bomb Day is known as "The Firing of the Bombs," and consists of exploding 100 "bombs" - special firecrackers that are handmade in Marysville specifically for Bomb Day, using bamboo, red paper, and gold leaf. The bombs have rope rings attached to them with wire. The watching crowd scrambles to retrieve these rings, which are said to bring good fortune throughout the following lunar year. The rings can also be sold to others who want good fortune. The rings are numbered, and in accordance with Chinese tradition, the #4 ring is said to be the luckiest.

W. T. Ellis, Jr., for whom Ellis Lake was named, wrote in his autobiography Memories: My Seventy-Two Years in the Romantic County of Yuba, California about the Chinese immigrants' celebration of Bomb Day in Marysville in the 19th century: