Camptonville is an unincorporated town in Yuba County, surrounded on all sides by Tahoe National Forest. It is located south of Weeds Point, east of Bullards Bar Reservoir, and northeast of Dobbins. It has a population of 698 (as of a 2009 estimate). Its elevation is 2,825 feet. The average annual rainfall is 59.7 inches and average annual snowfall is 30.1 inches. The average high temperature in July is 92.4°, and the average low temperature in January is 33.6°.

The native plant community of Camptonville is yellow pine forest.

Camptonville was named in 1854 for Robert Campton, who was the town blacksmith at the time, having arrived there in 1852. By then, the Gold Rush had already brought miners flooding in—and by 1866, the town had 1,500 inhabitants. hydraulic mining was done extensively in Camptonville, uncovering as much as $500,000 in gold annually. Lester Allen Pelton invented the Pelton Wheel in Camptonville in 1878, making the hydroelectricity generators used to run the mining machinery more efficient. Camptonville burned down completely several times, so none of the Gold Rush era buildings remain.1

After the Gold Rush, the local economy depended upon Camptonville's sawmill. When the sawmill shut down, most of the population moved away. Mountain House and the Oregon Creek covered bridge are some of the historic places in Camptonville. 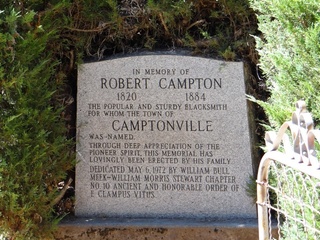 A monument on Cleveland Avenue in Camptonville commemorates Robert Campton, for whom Camptonville is named. Photo by queerbychoice. 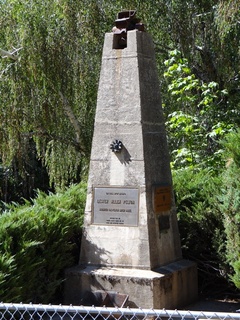 A monument on Cleveland Avenue in Camptonville commemorates Lester Allen Pelton, who invented the Pelton wheel in Camptonville. Photo by queerbychoice.

For employed residents, the average travel time to work was 33 minutes. 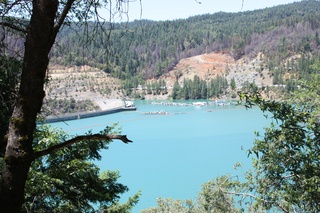 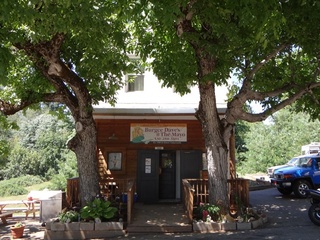 Burgee Dave's at the Mayo Saloon. Photo by queerbychoice. 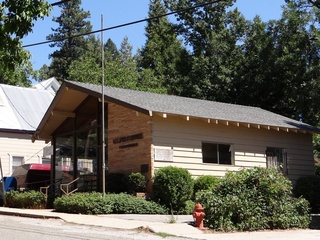