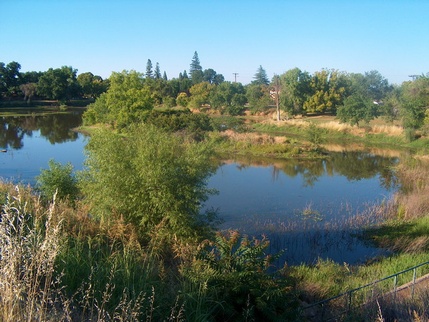 Native plants and invasive weeds mingle around the edges of East Lake. Photo by queerbychoice. East Lake in Marysville is also called Eastpark Lake . The park surrounding it is called East Lake Park and is bounded on the north and south by 17th and 14th Streets, and on the east and west by Yuba Street and the railroad tracks. It features picnic tables.

East Lake is named for its location just east of Ellis Lake. Ellis Lake and East Lake were originally part of a single large, swampy area in the center of town. East Lake today remains closer to its original, natural state than Ellis Lake, because it has not been lined with cement as Ellis Lake was, and it is not surrounded by lawn as Ellis Lake is. Many native plants thrive at East Lake today, including Fremont's cottonwood trees, arroyo lupine and miniature lupine, and elderberries and grapes. One of the worst invasive weeds at East Lake is the Chinese tree-of-heaven.

Per Marysville Municipal Code § 6.20, it is illegal to swim, ski, wade, have body contact with, or place or operate a motorboat in East Lake without special written permission from the Marysville City Council. This is because the water is polluted. Punishment is a $100 fine for the first offense and a $150 fine for each subsequent offense.

Despite the above concern about water pollution, Marysville Municipal Code § 16.30 states that fishing in East Lake is permitted with a valid fishing license. Punishment for fishing without a valid license is a $150 fine.

Per Marysville Municipal Code § 16.20, it is illegal to possess or consume any alcoholic beverage in East Lake Park without a permit. Punishment is a $250 fine.