Spanish explorer Luis Arguello named the river "el Rio de las Plumas" (the River of the Feathers) because he saw many feathers floating on the water.

Hydraulic mining was done extensively on the Feather River during the Gold Rush. Due to mine tailings that were dumped into the river and raised the riverbed substantially, the river is no longer navigable north of Yuba City and is only navigable by small boats south of Yuba City. (Before that, the Feather River had been navigable to Oroville.) These mine tailings also caused the river to flood Sacramento repeatedly in the 1870s, until steps were taken to better protect Sacramento from flooding.

It is now the main source of water for the California State Water Project, providing water to central and southern California. 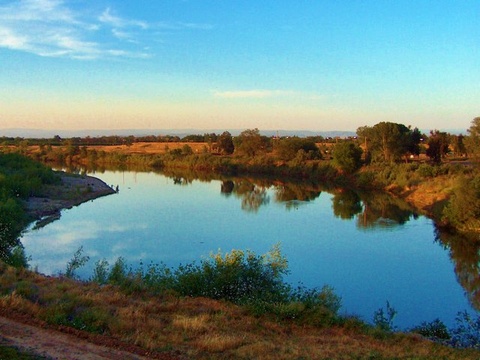 The Feather River, seen from Yuba City. Photo by queerbychoice.

Rare birds that can be seen at the Feather River include bald eagle, bank swallow, Swainson's hawk, and yellow-billed cuckoo. There is also a combined great egret and great blue heron rookery near O'Connor Lakes.2