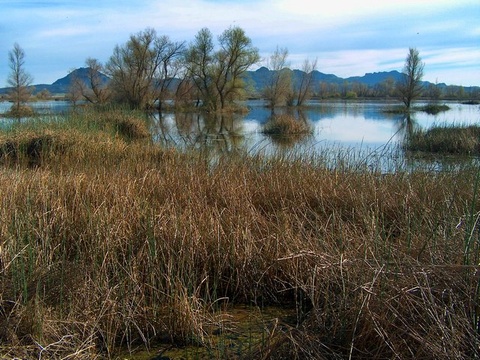 Gray Lodge State Wildlife Area. This is the view from the Flyway Trail, looking south toward the Sutter Buttes. Photo by queerbychoice.

Gray Lodge State Wildlife Area is 9,182 acres of riparian forest and freshwater marsh, including vernal pools, permanent ponds, and watergrass where more than a million waterfowl (including more than 100,000 geese) spend each winter.1 It is located directly north of the Sutter Buttes. Most of it is in Butte County, but the southeastern tip of it extends into Sutter County.

Gray Lodge State Wildlife Area includes more than 80 miles of roads and more than 50 miles of trails for hiking and bicycling. All main roadways terminate in parking areas. The wildlife museum features taxidermied bird and mammal species. There are picnic tables near parking lot 14. Also near parking lot 14 are a 2.5-mile (round trip) graveled levee trail and an 0.6-mile (round trip) self-guided, wheelchair accessible Wetland Discovery Trail, which features an informational booklet and leads to a platform for bird watching and other wildlife viewing. Near parking lot 18, there is a wheelchair accessible wildlife observation hide, overlooking a seasonal pond. A second wildlife observation hide is located a short walk down the Flyway Trail (not wheelchair accessible) and also overlooks a seasonal pond. 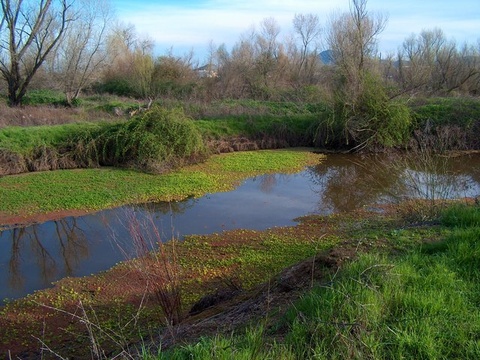 Canals along the Wetland Discovery Trail at Gray Lodge State Wildlife Area. Photo by queerbychoice. There is an entrance charge of $2.50 per person for a day use pass, paid mostly on the honor system: each parking lot has envelopes to place your money in (with numbered tear-off stubs to carry with you as proof of payment) and a slot to deposit your envelope into. Children under age 16 get in free. Visitors displaying a valid California hunting, trapping or fishing license also get a free day use pass; however, they must pay daily permit fees to hunt, trap, or fish. Organized youth or school groups may call to request free guided tours.

All visitors must stay on the roadways and trails; the fields and ponds are for the wildlife. To preserve the health of Gray Lodge wildlife, please don't feed the animals.

Bicycling is allowed on most roadways, but on Rutherford Road, bicycling is only allowed during waterfowl season.

Pets are allowed in motor vehicles or on a leash less than 10 feet in length, except where prohibited. 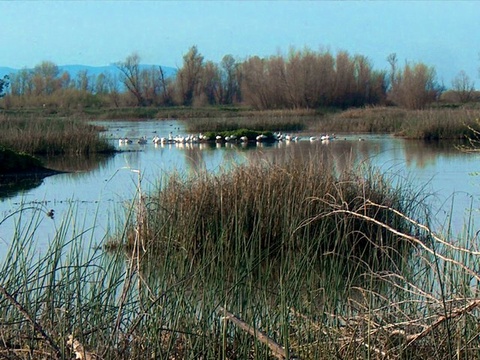 Birds at Gray Lodge State Wildlife Area. Seen from the Flyway Trail, February 2010. Photo by queerbychoice. Waterfowl season is generally designated as October through mid-February, when waterfowl populations are typically highest. From two weeks before waterfowl season until one week after waterfowl season, the majority of Gray Lodge State Wildlife Area is closed to all non-hunting activities. During this closure period, wildlife viewing is restricted to designated areas of the sanctuary, all visitors on the 3-mile auto loop must remain in their cars, bicycling is allowed only on Rutherford Road, and fishing is restricted to the Avis Access only.

Hunting is allowed only during the designated waterfowl season, and only with a valid hunting or trapping license from the California Department of Fish and Game. Hunters must not possess more than 25 shotgun shells while in the field.

Dove: Hunt days are daily during the September dove season and only on waterfowl or pheasant hunt days during the late dove season. Dove hunting is allowed only in designated portions of the wildlife area.

Deer: Hunt days are only during the Gray Lodge Deer Hunt under special permit, zone G-12, issued by drawing.

Falconry: Hunting with falcons is restricted to the east side of the area. Hunt days are Saturdays, Sundays, and Wednesdays during falconry season.

Fishing is allowed only from the shore and only with a valid fishing license from the California Department of Fish and Game. Fishing is allowed seven days a week all year long. From two weeks before waterfowl season to one week after waterfowl season, fishing is restricted to the Avis Access only. The ponds and canals support black bullhead, black crappie, bluegill, brown bullhead, channel catfish, common carp, golden shiner, green sunfish, largemouth bass, logperch, mosquitofish, Sacramento blackfish, Sacramento sucker, silver goldfish, threadfin shad, and warmouth.

The California Department of Fish and Game provides a list of bird species that can be seen at Gray Lodge State Wildlife Area.

Other native reptiles in the wildlife area include the Western pond turtle.

Native amphibians in the wildlife area include the California slender salamander, Pacific tree frog, Western spadefoot toad, and Western toad. The tiger salamander has also been reported there, although this is not in its normal geographic range.