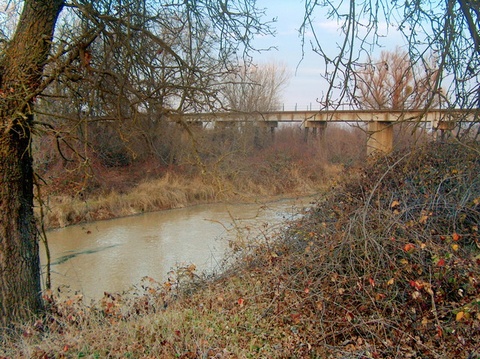 A Union Pacific Railroad bridge crosses Jack Slough about a thousand feet east of Highway 70. Photo by queerbychoice. Jack Slough is a slough that is about 16 miles long and flows into the Feather River in Marysville. It was apparently named for an African-American man from the Gold Rush era. An 1861 map listed a house along it near Mello as "N. Jack's," and two 1911 maps used the "N-word" before the name of the slough. "Jack" was probably John Churchill, who farmed successfully along Jack Slough. But for the use of the "N" word, we would likely have forgotten about John Churchill.

1. California's Geographic Names: A Gazetteer of Historic and Modern Names of the State by David L. Durham. Word Dancer Press, 1998