Live Oak is a city in Sutter County that was incorporated in 1947. It is located west of the Feather River, northwest of Sunset, north of Encinal, northeast of the Sutter Buttes, and southeast of Pennington. It has a population of 8,571 (as of the 2009 California Department of Finance estimate), which is a 1.5% increase from the previous year and a 37.6% increase from 2000. Its total area is 1.9 square miles. Its elevation is 79 feet. The average annual rainfall is 18.6 inches and average annual snowfall is 0.1 inch. The average high temperature in July is 96.3°, and the average low temperature in January is 38.0°.

The U.S. Postal Service sometimes lists addresses in Encinal, Pennington, Sullivan, Sunset, and West Butte as being in Live Oak, because they are all in the 95953 zip code. However, on the Yuba-Sutter Wiki, we prefer listing the more specific locations.

The Live Oak post office was established in 1874.1 Live Oak was incrporated as a city in 1947. 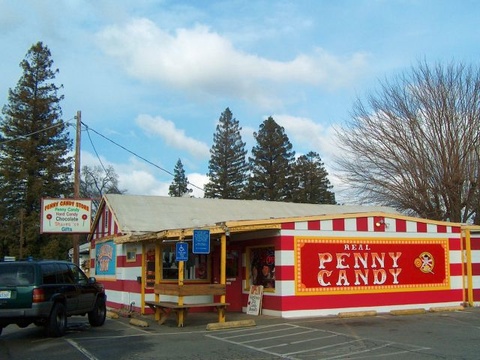 Penny Candy Store on Highway 99 in Live Oak. Photo by queerbychoice. As of a July 2007 estimate2, residents' median age was 31 years.