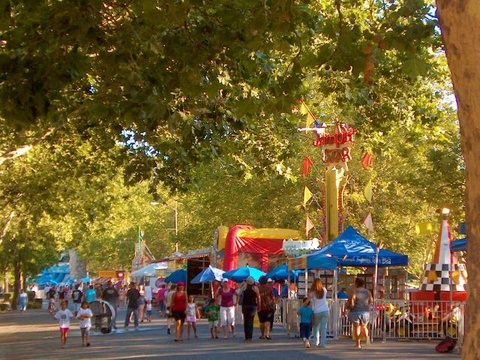 The 2009 Marysville Peach Fest featured rides such as the "Jumpin' Star" and "Wacky Shack." Photo by queerbychoice. The Marysville Peach Fest has been held annually since 1999 on the third weekend in July, on D Street between 1st and 6th Streets in Marysville. It was created by Jody Sodaro of Sodaro Orchards in Marysville and is co-sponsored by Sodaro Orchards and the Marysville Police Department. The fest celebrates the tremendous production of peaches in the Yuba-Sutter area. (Yuba County and Sutter County are ranked sixth and second, respectively, among all the nation's counties in production of peaches.) It includes a 5K Run/Walk, live music, activities, rides, street vendors, and fresh peaches. There is also a pancake breakfast held at the Silver Dollar Saloon as a fundraiser for the Marysville High School Future Farmers of America.