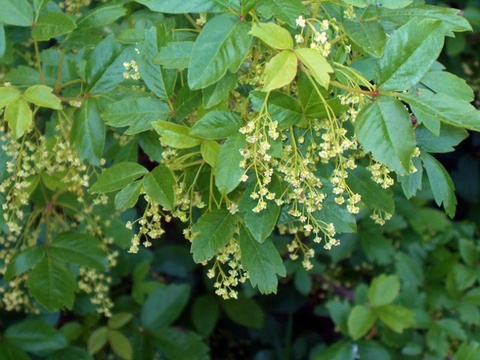 A large poison oak shrub blooms near the Marysville City Cemetery in April 2012. Photo by queerbychoice. Poison oak is a native deciduous shrub or vine that produces a severe allergic reaction on contact with the skin of most people. The plant is very common in all parts of Yuba and Sutter Counties and most of California, although it is less common in relatively urbanized areas, where people keep it under control. hikers are likely to encounter it in all wilderness areas in the Yuba-Sutter area (especially Feather River State Wildlife Area, Spenceville State Wildlife Area, Daugherty Hill State Wildlife Area, and the Bobelaine Audubon Sanctuary) and should know how to identify it, how to avoid contact with it, and how to treat exposed skin and clothes.

Poison oak is a member of the cashew family and is not related to oaks. Other plants in the cashew family include mangoes, marulas, smoke trees, sumac, and of course, cashews. However, none of these other plants are members of the Toxicodendron genus, so they produce no comparable levels of urushiol (although they may produce extremely tiny, trace amounts of it that do not typically trigger allergic reactions in most people).

Poison oak berries are an important food source for local wildlife, especially for many birds. After eating the berries, the birds excrete viable seeds, thereby spreading the plant to new locations.

Poison oak leaves are always arranged in characteristic groups of three and typically have a waxy or oily texture. In late summer, its leaves begin turning bright red (which makes it easier to identify) and then falling off (which makes it much harder to identify). Because the urushiol is produced by the plant's stems as well as by its leaves, the plant remains extremely dangerous even when completely leafless.

The leaves and stems (but not the berries or flowers) of poison oak are covered with an oil called urushiol. When absorbed into human skin, urushiol triggers an allergic reaction in most people, consisting of an itchy, red, blistered skin rash that usually takes one to three weeks to heal and stop itching. Repeated exposure to urushiol tends to produce increasingly severe allergic reactions with each new exposure. Also, people who are not allergic to urushiol often become allergic after repeated exposures, while people who were allergic in the past may stop being allergic if they have not been exposed to it for a long time.

It usually takes between five minutes and half an hour for urushiol to be fully absorbed by human skin. If you know or suspect that you have touched poison oak, washing your skin immediately with cold water can prevent your skin from absorbing the oil. (Warmer water may cause your pores to open, which could cause your skin to absorb more of the oil before you finish washing it off.) If you do not have water immediately available, try rubbing the leaves of other plants on your skin to try to absorb some of the urushiol into the leaves. In particular, the leaves of mugwort, which is extremely commonly found growing in the same areas as poison oak, are said to be good for removing urushiol from skin if applied within the first five minutes to half an hour after exposure to poison oak. In riparian forest areas in Yuba County, you may also find alder trees growing nearby. It is said that pressing the buds of alder trees onto skin that has recently been exposed to poison oak can also help remove the urushiol and prevent an allergic reaction.

During this period of between five minutes and half an hour after exposure, touching the exposed area may spread the urushiol to other parts of your skin, causing a rash to later appear over more areas of your body. Therefore, you should try to avoid touching the exposed area with your bare skin. Also, clothing that has come into contact with urushiol can cause an allergic reaction if you touch it at any point before it is thoroughly washed. It is best to wash such clothing in hot water, preferably with a soap specifically made to break down urushiol, because in some cases, a regular wash cycle may only dilute the urushiol and spread it to other clothes in the same load of laundry, leaving enough of it intact to cause new allergic reactions. Soaps specifically made to break down urushiol can also be useful for washing your skin in the first five minutes to half an hour after exposure, so you may want to buy such a soap in advance and take it with you on hiking trips.

By the time a rash develops, the urushiol has most likely already been fully absorbed into your skin and cannot be removed. An allergic reaction to poison oak does not go away until all the affected skin has flaked off and been replaced, which usually takes one to three weeks, depending on the severity of the rash. You can minimize the itch with antihistamine lotion or calamine lotion, but only time will truly cure it.