Rio Oso is an unincorporated town in Sutter County. It is located on the south bank of the Bear River (opposite Plumas Lake) and near the east bank of the Feather River (opposite Wilson), north of East Nicolaus, northwest of Trowbridge, and northeast of Nicolaus. It has an estimated population of 963.

There used to be a town called Oro City near the present site of Rio Oso. Oro City Post Office was established in 1853 and discontinued the same year, then reestablished from 1855 to 1858. It was located on the Bear River, three miles above the confluence with the Feather River.1

The Rio Oso Post Office was established in 1920. The name of Rio Oso means "Bear River" in Spanish.2 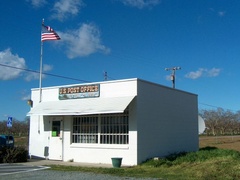 Rio Oso Post Office with orchard in the background. Photo by queerbychoice.