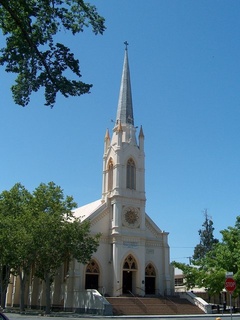 St. Joseph Catholic Church in Marysville was built in 1856. Architect Warren P. Miller added the spire in 1862. Photo by queerbychoice.

Roman Catholicism is the world's largest Christian denomination, comprising approximately half of all Christians and one sixth of the world's population.1

The Roman Catholic Church opposes abortion, birth control, condoms, the Iraq War, and secular governmental recognition of same-sex marriage. In recent years, it has been in the news due to repeated lawsuits over child molestation perpetrated by Roman Catholic priests and covered up by bishops. A Roman Catholic priest created the Big Bang theory of the creation of the universe, which was then promoted by Pope Pius XII. 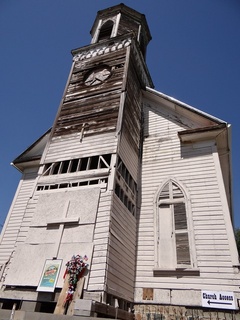 The former Church of the Immaculate Conception in Smartsville was built in 1871 and has not been used for religious purposes since 1968. It was sold to the town by the Diocese of Sacramento in 1998. Photo by queerbychoice.