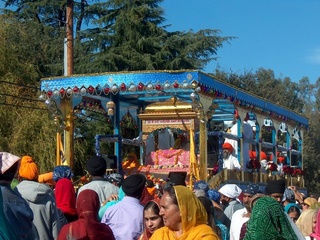 The first float in the 2009 Sikh Parade. This float always carries the Guru Granth Sahib—the book of Sikh scriptures—on a throne. Photo by queerbychoice. The Sikh Festival and Parade has been held annually in Sutter County since 1979. The Sikh population in Sutter County is one of the largest outside the Punjab state of India.

The festival is held to commemorate the inauguration of the Sikh holy text as the Guru Granth Sahib in 1708. Sikhism had ten previous gurus. The fifth guru, who was called Guru Arjan Dev, compiled the writings of the first four gurus, along with his own and some that he selected from other religions, into a book called the Granth. Later gurus added additional writings. When the tenth guru, who was called Guru Gobind Singh, died in 1708, he named the Granth—the book of gurus' writings—as his successor and ordered that the book should sit on the guru's throne forever after. The first float of the parade always carries the book on its throne, accompanied by its human attendants.

The parade takes place on the first Sunday of November. It begins and ends at the Sikh Temple in Tierra Buena and is 4.5 miles long, making it the longest parade in the Yuba-Sutter area. As many as 85,000 people attend each year. People of all faiths are welcome.

The festival lasts three days, of which the first 48 hours are spent in nonstop prayer. The prayer begins at 9:00 a.m. on the Friday that precedes the parade. There is a fireworks display Friday evening. On Saturday morning, the flag is raised, and at noon, a public lunch is held, followed by an Open House. The festival culminates with the parade on Sunday. The streets along the parade route are lined with booths full of food, all of which is free to everyone—honoring one of the three main pillars of the Sikh religion: sharing one's earnings with others who are less fortunate. (The Sikh Temples also honor this idea by serving free food to the needy every day of the year.) 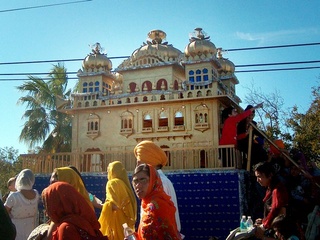 A reproduction of a Sikh temple in the 2009 Sikh Parade. Photo by queerbychoice. 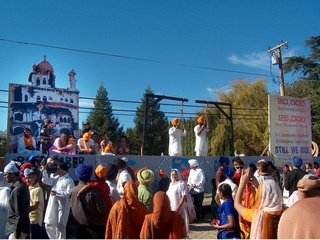 A float in the 2009 Sikh Parade commemorates the 1984 anti-Sikh riots. Lettering on the left says, 'Remember 1984,' while the sign on the right says, '20,000 Butchered in Delhi, 25,000 Made Disappeared in Punjab. A Community Bruised. A Diaspora Tarnished. Still We Rise.' Photo by queerbychoice. 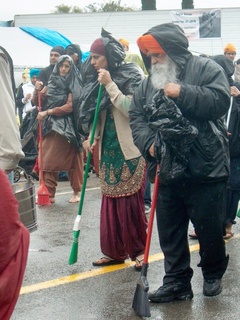 Rain or shine, the parade goes on as usual. In the rainy 2010 Sikh Parade, devout Sikhs walk backward before the first float, sweeping the street along the entire 4.5-mile route, as an act of religious devotion. Photo by queerbychoice.

It is considered polite for all parade-goers (both Sikh and non-Sikh) to wear long pants (no bare ankles) and, while the first float is passing, to cover their heads with a scarf, hood, handkerchief, or other soft fabric covering. Hats (for example, baseball-style caps) are not appropriate.

If you enter the Sikh temple, you should cover your head and remove your shoes before entering. Alcohol, drugs, and tobacco products should not be taken into the Sikh temple. Anyone who has just used them or is under the influence of them should not enter the temple.

Take only as much food as you will eat. It is not polite to waste the food.

Please do not litter. Sikhs work hard to clean up any litter left behind, but the least you should do to express basic gratitude for all the free food is to dispose of the plates, cans, bottles, and other remains in the trash bags provided all along the parade route.