The Sutter Buttes are considered the world's smallest mountain range: a small circle of andesitic lava domes in Sutter County, about 10 miles across. The highest peak, South Butte, has an elevation of about 2,120 feet. 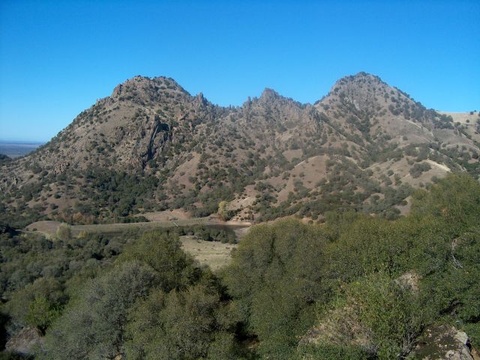 A portion of the Sutter Buttes. Photo by queerbychoice. The Sutter Buttes were formed over 1.5 million years ago by a volcano that is now extinct. Some geologists have suggested that it represents the southernmost of the Cascade Volcanoes, but there are significant differences in age and form compared to the other volcanoes in that range, so this suggestion is still being debated.

The Nisenan (also called Maidu) people, who lived for thousands of years in what is now Yuba and Sutter Counties, called them Esto Yamani (Histum Yani), which means "the Middle Mountain." The Patwin (also called Wintun) people, who lived farther west, called them Onolai. No Native American nation claimed ownership of the Buttes, but Native Americans visited the mountain regularly to gather acorns and other foodstuffs or to hunt game. The Buttes also played an important role in the religions of nearby Native American nations. The Nisenan people's religion regarded the Sutter Buttes as the place where life originated and a place their spirits would travel after they died.

In 1806, Gabriel Moraga, a Spaniard trying to locate possible mission sites, was the first European to see the Buttes. After that, the Buttes were variously known as Los Picachos ("The Peaks"), Los Tres Picos ("The Three Peaks"), the Sacramento Buttes, and the Marysville Buttes. They are now named for John Sutter.

In 1963, a missile silo complex containing three separate Titan I ICBM missiles was constructed near the base of the Buttes. The complex was decommissioned and mostly dismantled in 1965. This site has been host to many vandals and trespassers since the early 1980s.

Much of the land on the Sutter Buttes is privately owned by cattle and sheep ranchers, but the Middle Mountain Foundation and the Yuba Historical Society lead hikes through most areas. In 2003, the California Department of Parks and Recreation purchased a 1,785-acre tract in Peace Valley with the intent of developing it for public access.

Peace Valley is northwest of North Butte. Pugh Cemetery is at the northern edge of Peace Valley.

Huff Canyon is south of North Butte. The Dean Place is in Huff Canyon.

Pass Road passes through Moore Canyon and Brockman Canyon, south of South Butte and the other major peaks.

Kinch Canyon is east of Peace Valley, at the foot of the Buttes.

Oscar H. Roesner composed the following poem about the Sutter Buttes. It was published in a local newspaper in the mid-1930s.1