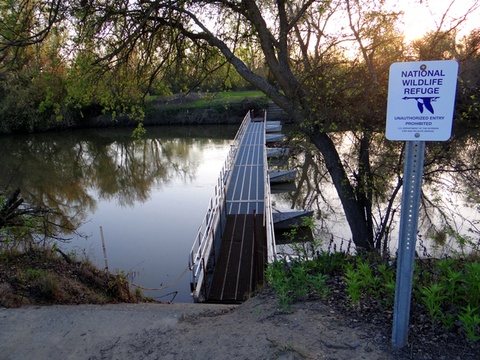 A sign at Sutter National Wildlife Refuge prohibits unauthorized access. The bridge in the background is in disrepair. Photo by queerbychoice. The Sutter National Wildlife Refuge is 2,591 acres of federally protected riparian forest, freshwater marsh, and valley grassland habitat, including vernal pools, permanent ponds, watergrass, and uplands. It is located south of Sutter and the Sutter Buttes, southwest of Yuba City and South Yuba City, northwest of Tudor, northeast of Cranmore, and southeast of Meridian. Over 80% of the refuge is located within the Sutter Bypass, which diverts flood waters from the Sacramento River between two large levees. During floods, much of the refuge can be under 12 feet of water or more.

Sutter National Wildlife Refuge has one of the most intensive marsh management programs in California's wildlife refuge system. It provides winter habitat for more than 200,000 ducks and 100,000 geese, as well as herons and many other birds. It has the largest colonies of white-faced ibis in the Central Valley. The waterfowl population peaks in February and March.

The refuge is divided into 20 units and is bisected by Hughes Road. Recreation activities include wildlife observation and photography from Hughes Road. Hunting of ducks, geese, coots, snipe, and pheasants is permitted October through January on Saturdays, Sundays, and Wednesdays.

Other wildlife found at the refuge include the black-tailed deer, giant garter snake, and winter-run Chinook salmon.