Veterans Park is the name of two parks in Yuba County: one in Plumas Lake and one in Marysville. There is also a Veterans Memorial Park in Sutter County.

Veterans Park in Plumas Lake is bounded on the north and south by Cobblestone Elementary School and Kensington Drive and on the east and west by Belvedere Way and Churchill Way. It feaures playground equipment, a baseball and softball field, and picnic tables. 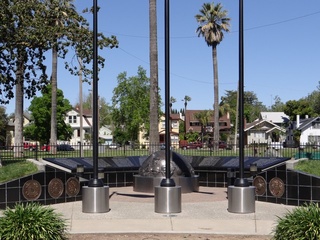 The memorial in Veterans Park in Marysville lists the names of all the Marysville veterans killed in World War I, World War II, and the Korean War. Photo by queerbychoice. Veterans Park in Marysville is a city park comprising 2.6 acres. It is bounded on the north and south by 6th and 5th Streets and on the east and west by G and H Streets. It features playground equipment, benches, and picnic tables. This park was formerly called Napoleon Square Park. Its name was changed in 2000, on the completion of the Veterans Memorial here.

Rules for Veterans Park in Marysville 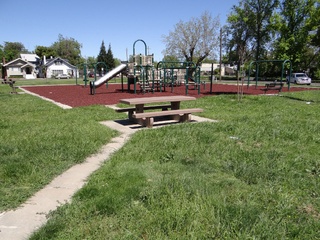 Veterans Park in Marysville also features playground equipment, benches, and picnic tables. Photo by queerbychoice. Per Marysville Municipal Code § 16.20, it is illegal to possess or consume any alcoholic beverage in Veterans Park without a permit. Punishment is a $250 fine.