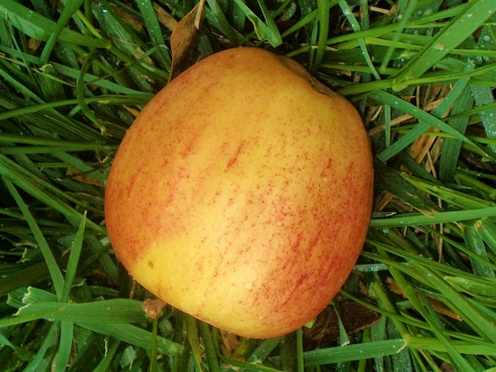 A golden apple slung by a Pope lies on one of the front lawns of the Yuba Erisian Apple-Slinging Temple. The Yuba Erisian Apple-Slinging Temple (YEAST) is a member of the Discordian Church (also called the Erisian Church). Discordianism is a modern religion whose principal deity is Eris, the ancient Greek goddess of discord. Discordianism recognizes chaos, discord, and dissent as valid and desirable qualities—in contrast with most religions, which idealize harmony and order. Discordianism is centered on the idea that chaos is all that there is, and that disorder and order—the former considered a concept distinct from chaos—are both illusions.

Discordianism was founded circa 1958–1959 by Malaclypse the Younger, who published its principal surviving sacred text, the Principia Discordia, and by Lord Omar Khayyam Ravenhurst, to whom its principal partially lost sacred text, The Honest Book of Truth, was revealed. Some consider Discordianism to be an offshoot of Mormonism, because there are many similarities between the way The Book of Mormon was revealed to Joseph Smith, Jr., and the way The Honest Book of Truth was revealed to Lord Omar Khayyam Ravenhurst, who had been raised as a Mormon. However, Discordianism bears many resemblances to other religions as well.

According to the Principia Discordia, a Pope is "every single man, woman, and child on this Earth." The Principia Discordia also states, "A Pope is someone who is not under the authority of the authorities." It is up to each person to realize for herself or himself that she or he is already a Pope in the Discordian Church. The rights of a Pope include but are not necessarily limited to the rights to do the following:

The Original Snub is the Discordian name for the events preceding the Judgment of Paris. Zeus snubbed Eris by not inviting her to the wedding of Peleus and Thetis. Eris responded by showing up at the wedding and slinging a golden apple with the word kallisti (Ancient Greek: καλλίστῃ, meaning "for the prettiest one") inscribed in it into the proceedings. Three goddesses claimed the apple: Hera, Athena, and Aphrodite. A Phrygian mortal named Paris, who was renowned for his fair judgment, was asked to judge which of them was the prettiest one and thus which of them should have the golden apple. All three goddesses attempted to bribe Paris to choose them: Hera offered to make him king of Europe and Asia, Athena offered wisdom and skill in war, and Aphrodite offered the love of Helen of Sparta, the world's most beautiful woman. Paris accepted Aphrodite's gift and awarded the apple to her, receiving Helen but offending Hera and the Greeks. The Greeks' expedition to retrieve Helen from Paris in Troy is the mythological basis of the Trojan War, which "is said to be The First War among men."

The Pentabarf is the doctrine of Discordianism. It is as follows:

Because the Original Snub involved excluding the Goddess from a wedding, the YEAST takes a special interest in the exclusion of same-sex couples from marriage. One major project of the YEAST is to refuse to recognize the marriages of people who refuse to recognize same-sex marriages. Although the people who voted for Proposition 8 may believe themselves to be "married," their "marriages" are not valid in the eyes of the Discordian Church. In conversations with such people, the members of the YEAST are instructed to refer to the longtime companions of people who voted for Proposition 8 with terms such as "partner," "friend," or "roommate."

It is the position of the YEAST that all opposite-sex relationships are fundamentally hedonistic, being driven by shallow rewards such as social privileges and the probable opportunity to reproduce oneself (selfishly contributing to overpopulation), while all same-sex relationships are fundamentally puritan, being driven by a self-sacrificing devotion to love even at the cost of having to face societal discrimination and give up ready access to reproduction. Please note that the YEAST does not consider this to signify any inferiority on the part of opposite-sex relationships, because in the Sacred Chao all things are equal; thus, the hedonistic approach to life that is fundamental to heterosexuality is no worse and no better than the puritan approach to life that is fundamental to homosexuality.

However, it has been the YEAST's observation that virtually everyone who opposes same-sex marriage fails to recognize the fundamentally greater puritanism of homosexuality, and in fact opposes same-sex marriages precisely because of a belief that hedonistic relationships are unworthy of being called marriage. In accordance with these people's belief that hedonistic relationships should not be recognized as marriages, the members of the YEAST refuse to recognize these people's own hedonistically heterosexual "marriages." At the same time, the YEAST continues to recognize, celebrate, and affirm the marriages of opposite-sex couples in which both members support same-sex marriage.

In the case of opposite-sex couples in which one member supports same-sex marriage and the other opposes it, some members of the YEAST argue that the marriage should be "half recognized." Other members of the YEAST argue that registered domestic partnerships available to such couples already constitute such "half recognition," so no further recognition is called for. Because the Discordian Church strives to perpetuate disagreement rather than resolving it, it is unlikely that the disagreement will ever be resolved.