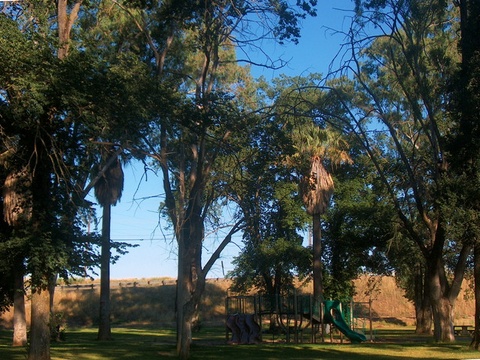 Elm trees and palm trees surround the playground equipment at Yuba Square Park. The on-ramp to the Simpson Lane bridge over the Yuba River is visible in the background. Photo by queerbychoice. Yuba Square Park (also called Yuba Park) is a Marysville city park comprising 4.2 acres. It is bounded on the north and south by East 10th Street and City Park Road, and on the east and west by Ramirez Street and Yuba Street. It features playground equipment and picnic tables. 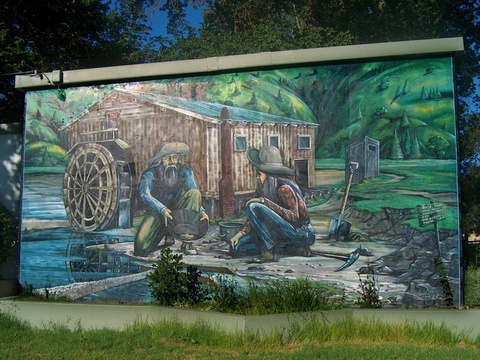 The mural on the sewage pumping station at Yuba Square Park depicts two men panning for gold. The sign painted into the right side of the mural acknowledges the local businesses that sponsored the creation of the mural. The sign reads, "Gold Claim. Superior Radiator, Countertops Unlimited, PDQ, H and S Automotive, Primetime Pizza." Photo by queerbychoice.

Per Marysville Municipal Code § 16.20, it is illegal to possess or consume any alcoholic beverage in Yuba Square Park without a permit. Punishment is a $250 fine.

In 1998, the Marysville City Council attempted to sell Yuba Square Park but was stopped by a lawsuit.