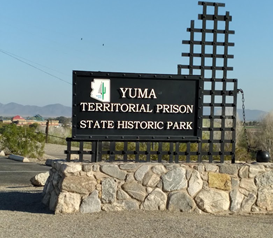 Resting hillside overlooking the Colorado River and just a few miles west of where the Gila River unites with the Colorado remains the ruins of Arizona’s infamous Territorial Prison. In 1849 Yuma began to experience the American Westward rush when numerous immigrants arrived by ferry going across Yuma on the way to the California gold rush.  Furthermore, due to the discovery of placer gold on the Colorado River Yuma experienced a surge in population in 1858. Consequently, Yuma incorporated and became the county seat. By 1875 Territorial Governor Safford recommended the construction of a territory prison. In fact, The competition of several towns included Prescott, Florence and Phoenix to secure the prison with that the original location plan of the new prison was said to be built in Phoenix AZ but during the legislative session that took place that same year Yuma city leaders , Councilman Jose Maria Redondo and Rep. R.B Kelly cleverly amended the bill to read “Yuma” in the place of Phoenix. The measure passed and Yuma became the site of the coveted Territorial Prison.

This desert Alcatraz constructed with thick adobe walls and resting on granite hillside with the current of the river to the East and North while miles of barren harsh desert stood South and West provided natural barriers. From there, the Yuma Territorial Prison State Park now located in Yuma, Arizona is a historical landmark that put the little town of Yuma on the Maps. The former prison opened on July 1, 1876, approved by territorial legislature in 1875 and given a budget of $25,000 for the project. That following year the prison was first opened and moved in the first 7 convicted inmates. Over the duration of 33 years of operation between 1876 to 1909, the prison contained a total of 3,069 convicts including 29 women all convicted of crimes ranging from polygamy to murder. Built on a solid rock foundation; The cells were feet by eight with high domed ceiling with poor ventilation. Inside the cells were two metal tiers of bunks three bunks to each tier therefore holding six inmates to each cell with no wash bowl or furniture and no toilet, except for a bucket that was emptied once a day. If anyone knows anything about Yuma, they will tell you it is hot, hot, hot. During the months of May through September Yuma heat came with for its scorching high temperatures that made this place an inferno the temperatures could get as high as 120 degrees. As a result, inmates labeled this old west prison as a literal “hell hole”. It is said that The Yuma Territorial Prison was one of the toughest facilities at this time. For inmates who broke prison regulations they were sentenced to time in the “Snake Den” prisoners who disobeyed had to sit in the pitch-dark stone room shackled with no bed and no outside contact except to receive bread and water once a day. 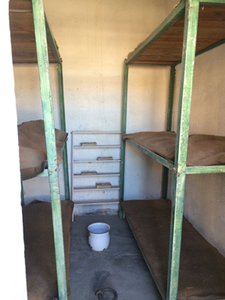 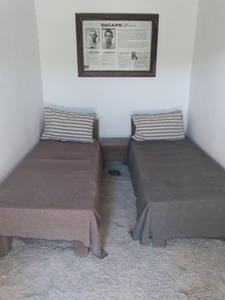 Original iron bunk beds and layout of the cells 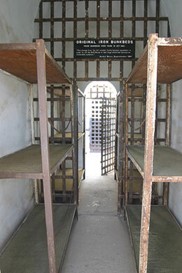 typically there was 6 inmates to a cell

Despite all that, historical records indicate the prison was humanely managed prisoners had free time in which they read and crafted many items. Prisoners also had regular medical attention and access to a hospital. Schooling was also available, prisoners were given the opportunity to learn to read and write, they were also taught how to speak Spanish and German. They also had access to medical care a fully functioning library.  Inmates on good behavior were given the opportunity to be entertained by musical bands of townspeople and electricity was introduced to the facility by 1885. Many of the stories written by writers about the prison have surely been exaggerated beyond truth, mostly to make it appear like horrendous but among historians who will say that the prison was a model institution and one of the better ones in the West for its time.  Among those 3,069 inmates ranging in age from fourteen to eighty-eight, men, women all by various ethnicities that were housed by the Yuma Territorial Prison were some of the roughest and toughest characters the West has ever known. Including Buckskin Frank Leslie, scout, marksman and all-around tombstone character, Pearl Hart; female stagecoach robber, who was made famous by embellished newspaper articles and following her released tried her hand in acting from there no one knows for sure what happened after that. Also included were Mexican revolutionaries who were part of the Partido Liberal Mexicano, otherwise known as Magonistas all included members Ricardo Flores Magon, Librado Rivera, and Antonio I. Villarreal.

By 1909 the prison closed down due to overcrowding and no room for expansion of the prison and inmates were transferred to a newer facility in Florence Arizona. Even though the institution was closed, its history was far from over. After the prison officially closed in 1909 a fire took The Yuma High School, so they used the prison as a location for classes for a short time until proper facilities were built for the students. Yuma Union High School occupied the buildings from 1910 to 1914. When the school's football team played against Phoenix and won, the Phoenix team called the Yuma team "criminals “as an insult from which Yuma High eventually adopted the nickname with pride calling themselves the Yuma High Criminals to this day. After that, the prison building was used as a shelter for the homeless during the Great Depression and even a movie location for old western films like Three-Ten to Yuma both the original and the remake(2007), Riot and many more. Later floods, theft, railroad expansion and the building of the Ocean to Ocean Highway destroyed sections of the prison.

Then by 1939 the Yuma townspeople took notice on the importance and historic significance this place offered. So, the community worked together thus by 1941 the museum was put up and operated for the next twenty years. From there the Yuma Territorial State Prison became Arizona’s third state park. Today the only original adobe structure that remains in the “Sally Port entrance”. Along with that the dark cell, the regular cells and the main guard tower has since been reconstructed but still stands in their original place. The Territorial Prison at Yuma, Arizona, is a fascinating side trip to take when in the Yuma area. The park is labeled as Yuma’s number one tourist site bringing in people from around the world to learn the history of an important piece of Yuma History. Although the park is a smaller facility it still offers tons of entertainment and history on the Yuma territorial Prison this includes interactive exhibits, photographs, personal narratives of prisoners and prison staff it also includes restrooms and a gift shop full of great prison t shirts, keychains, books about the prison. So, for thirty-three years the thick adobe walls of the Yuma Territorial Prison restrained those who broke the law but now it welcomes those who seek to walk in their footsteps. 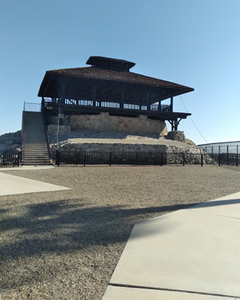 Main Guard Tower was also used as a water reservoir. 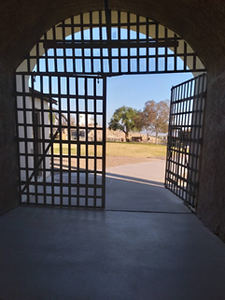 Sally Port that still stands today as the only entrance and exit through the prison. 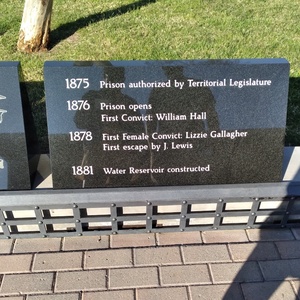 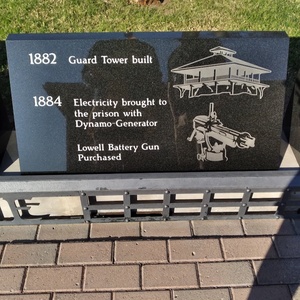 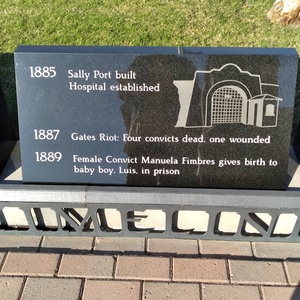 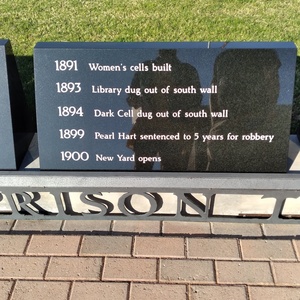 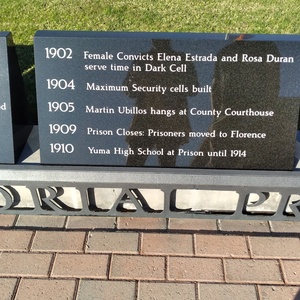 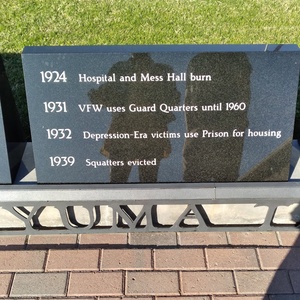 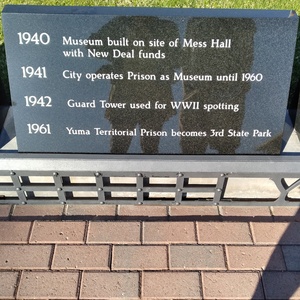 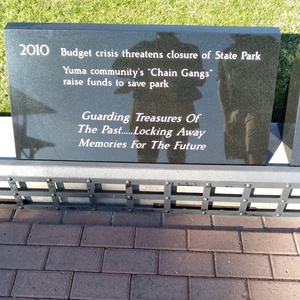 The Yuma Crossing National Heritage Area appreciates your support which allows us to preserve the Yuma Territorial Prison.

To Donate with a check, send to:

The history of Yuma and the Territorial Prison, Woznick, 1995