A website about Yuma Arizona (Yuma Landing) that anyone can edit

Yuma, AZ is a small town made up fewer than 100,000 people and with that small number one might question what type of historical events have happened in a town so small. However, the small town of Yuma has some interesting historical events that one might not have even thought would be considered a historical event without having done any research about it. One of those events happens to be the date that the very first airplane landed on Arizona soil. That event happened right here in Yuma, Arizona. The history and story behind the historic landmark that commemorates this occasion is an interesting one that ties in other historic locations in Yuma, Arizona. Yuma might be small, but it is full of surprises.

One historical landmark in Yuma that is driven past many people a day, and the probable have no thought or idea of the significance to it, is the Yuma Landing Bar and Grill. The Yuma Landing Bar and Grill is a restaurant and sports bar owned and operated by the Peach family. The Peach family have been residents of Yuma for 80 years and were immigrants from Czechoslovakia. They came through Ellis Island and came to Yuma in 1912 and also own the Historic Coronado Motel Hotel right next to the Yuma Landing, which the Peach family also owns. Fun fact, the Historic Coronado Motel Hotel used to be one of the first partnerships with the Best Western motels. However, it is no longer part of Best Western but it is still owned and operated by the Peach family under the Historic Coronado Motel Hotel name. The motel was built in 1938, which was 27 years after the historic event that inspired the name and story of the Yuma Landing Bar and Grill, which was built 35 years after the historical event, and eight years after the motel was build. 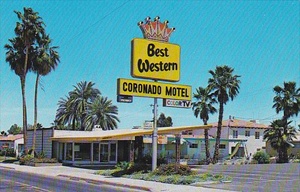 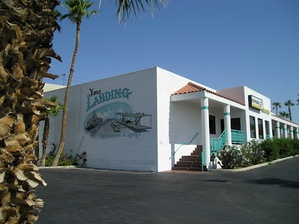 In 1912, Robert G. Fowler became the first man to fly across the West to East coast in the U.S. He started his journey in California on September 11th, 1911 in a Wright brother’s biplane. The plane weighed about 800 pounds and could reach a top speed of 45 miles per hour. He was making his journey to the east coast, Florida to be exact, in order to win prize money in the amount of $50,000. Sadly, he arrived in Florida on February 8th, 1912 which was past the contest set deadline which meant no one won the prize money.

His west to east coast trip was one for the history books, as well as his stop in Yuma, AZ on October 25th, 1911. On that day, his plane made a stop in Yuma between First and Third streets on Fourth Avenue. This is the exact location of where the Yuma Landing Bar and Grill sits now. When that plane touched down on Fourth Avenue, it became the first plane to touch down in Arizona ever. This was a big deal for the community since Yuma was such a small town and something as new as the airplane made a visit. Fowler stayed for a few days and then needed to continue his journey to the east coast. When it was time for Fowler to take-off, he had help from some of the local citizens. They pushed the plane up a nearby hill so that it could travel downwards and give the plane some speed. This was called a downhill run. Once the plane was up in the air, Fowler continued on his journey to Florida.

In 1946 there was a huge increase in tourism to Yuma which prompted the building of the Yuma Landing Bar and Grill. At this time, the restaurant was under lease and it did not become owned by the Peach family until 1990 when it was no longer leased out. Not only is the Yuma Landing Bar and Grill the exact location where the first plane to touch down in Arizona landed, but that spot is also marked with a commemorative of Robert G. Fowler’s journey. In 1963, fifty-two years after Robert Fowler had landed in Yuma, Fowler returned to Yuma to see the monument in honor of Flight in Yuma” as well as a sculpture of Robert G. Fowler himself, which was done by artist Laurie Slenning from Tucson, AZ. 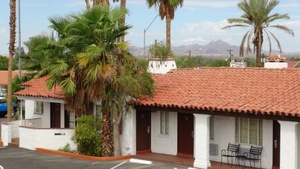 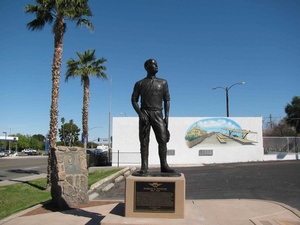 The Yuma Landing Bar and Grill was created to commemorate an important event in Yuma Arizona’s history. The outside of the restaurant is painted and decorated with airplanes and all things aviation. The inside of the restaurant is decorated the same, while also paying homage to Robert G. Fowler’s journey as well as the history of the Historic Coronado Motel Hotel. While Yuma, AZ might be a small town, it is the site of many important local and some national history events. These events mean a lot to the citizens of Yuma because of its virtues it places on a tight knit small town community. In fact, there is a small museum in Yuma located at what used to be the old Lobby of the Historic Coronado Motel Hotel. This museum is called the Yuma Historical Society Museum of Aviation Tourism. This museum puts on display the history our tourism in Yuma as the development of the city as a whole. It also puts on display the history and details of Robert G. Fowler’s journey and pit stop at the very location the museum is located. Since the Historic Coronado Motel Hotel and Yuma Landing Bar and Grill are located right next to each other, the very close proximity of the two constitutes the landing of the first plane in Arizona to have happened at basically both locations.

Yuma, Arizona is a small town with big historical moments. The Yuma Landing Bar and Grill is one of the multiple historical locations that is shown at the Yuma Historical Society Museum of Aviation Tourism and only makes up a fraction of the very interesting events to occur in the small humble town of Yuma, Arizona.

1. Our History. (n.d.). Retrieved from https://coronadomotorhotel.com/our-history/