Grand River Transit (GRT) is the transit authority in the Waterloo Region and an especially important institution in the city. 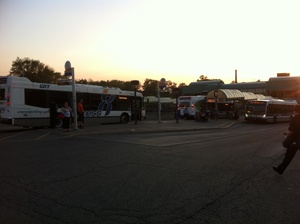 The GRT system can take a person nearly anywhere in the tri-city area within an hour, usually only needing a single transfer.

The iXpress (200, 201) routes are particularly useful, as they make fewer stops than other bus routes and have a wide reach from one end of the city to another.

The buses COULD use a little more predictabilty.

*Thanks wikipedia and grt.ca for this fare info