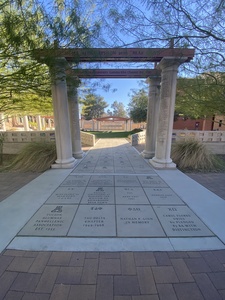 Geraldo Rivera was a part of the Tau Delta Phi fraternity in 1965. Today, Rivera is still an avid philanthropist. Rivera raised millions of dollars to help with the education crisis and to treat people with autism.

Greek Heritage Park is a historical and commemorative park that was first opened in 2016. The goal of the park was to provide a space where Greek members, as well as community members, could congregate. The park is located at the center of Greek Village. The goal was to allow for chapter and community events to occur there. The park currently honors more than 50,000 UA Greek alumni and 90 organizations that have been a part of the greek community since 1915 (TV Journalist Geraldo Rivera). 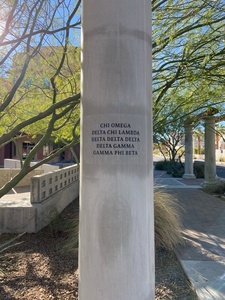 Pillars have all the Fraternity and Sorority chapter names

When a student approaches the park, they are greeted with arches. The park is peaceful and a great study spot. The arches provide information about the establishment of the Fraternities and Sororities. Some are dedicated to deceased presidents, like Scott Selig, a president of ZBT. The pillars are carved with poems and inspirational messages and the names of each of the chapters at UA. Similar to the arches, the cement ground provides insight into when chapters were established. Some cement panels are carved with dedications to deceased greek members. Benches provide maximum seating for students to be able to do their schoolwork. There is even a chair and table. Each bench is dedicated to a chapter. The park's back houses a timeline of when each of the chapters was established at the UA. Kappa Sigma is the first on the list. The last Fraternities to be established were Gamma Rho Lambda, Theta Delta Chi, and Sigma Tau Gamma. Lastly, the park provides a timeline with detailed descriptions of events. 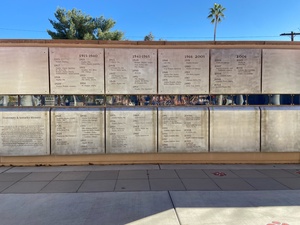 Timeline of the establishment of chapters

Greek Heritage Park provides a venue for Fraternity and Sorority activities. The park, which was once a lawn, now houses two pavilions, two plazas, and a stage. The walkway explains UA's history to visitors. The walkway highlights one of UAs most famous stories, the story of John "Button" Salmon. The man behind the words "Bear Down" (Celebrating History and the Future).

Past UA President Ann Weaver Hart2 stated, "Greek community members have contributed a tremendous amount to the traditions and history of our campus, and I look forward to their leadership and engagement at the UA for years to come" (Celebrating History and the Future).

Johanne Ives3, the past UA assistant dean of students and the director for fraternity and sorority programs. Ives states, "Our UA Greek alumni have been so committed to giving back so that students today and in the future can have the same experiences, educational resources, and opportunities… we could not be more grateful for the outpouring of support" (TV Journalist Geraldo Rivera).

Overall, Greek Heritage Park is a way to commemorate a University that allows for a fantastic student experience. The park engages with UA Greek life alumni as well and is part of the Greek Centennial Campaign. This campaign celebrates students, Greek life pride, and UA pride. The Greek Centennial Campaign records the history of Greek Life at UA, dating back to 1915. Gamma Rho, in 1900 was established as the first fraternity at UA. It became nationally established in 1915 as Kappa Sigma. In 1905 Gamma Phi Epsilon was founded, the first sorority, with the greek name Kappa Alpha Theta. In 1915 there were 15 Greek chapters at UA. Kappa Sigma, Sigma Alpha Epsilon, Sigma Nu, Sigma Chi, Pi Alpha Epsilon, and Phi Delta Theta were among the highest-standing fraternities. Women's sororities included; Pi Beta Phi, Kappa Alpha Theta, Kappa Kappa Gamma, Gamma Phi Beta, Chi Omega, and Delta Gamma. Since 1915, UA has looked at Fraternities and Sororities as valued assets to the campus.

Greek Heritage Park can commemorate chapters that have been a part of the UA community for centuries and the significant feats and accomplishments associated with Greek Life. In 1926 Kappa Sigma's brother Ted Monro wrote the song "All Hail Arizona." In 1929 Delta Chi brother Douglas Holsclaw wrote the words and co-wrote the music from the UA official fight song, "Fight! Wildcats! Fight!" (1915-1929: Ua-Greek-Centennial).

Greek Heritage Park commemorates UA during World War II. In 1943, UA began classes amidst war. There were few male students, which meant, for the first time, a woman was elected the position of student body president. The park allows for current students to understand UA's history. Today the UA student body is struggling amidst the Covid Pandemic. The park provides insights for today's students while reminding them of the hurdles that UA has endured. In 1943, the ratio of men to women was one to ten. The Athletic Department was forced to use army and navy trainees as well as students for athletic teams. The park allows students to realize that UA is a place that students can feel comfortable and at home—at the same time, commemorating past Greek Alumni's achievements. In 1944 Phi Gamma Delta brother Wilbur Bowers rescued the bell that hung from the USS Arizona in Pearl Harbor from getting melted down (1940-1949: Ua-Greek-Centennial).

Greek Heritage Park is a place that celebrates the opportunities that are created through Greek Life. Greek chapters at UA have allowed students to feel like they are a part of a community. UA is a vast school; the greek community makes UA feel small. The park's mission is to commemorate the history, memories, and individuals who have allowed UA to be a home for thousands (Alumni News: Ua-Greek-Centennial). 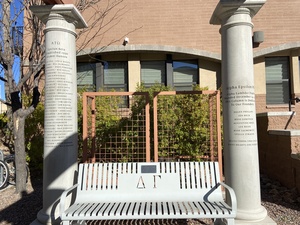 1UA has the same camaraderie feeling today. In the turmoil that is the COVID pandemic, UA has made it clear that they care about their students' wellbeing. UA encourages testing and has created innovative technology. Including vending machines that make salad and UA online.

3 Today Marcos Gunzman is the director of UA assistant dean of students and the director for fraternity and sorority programs.