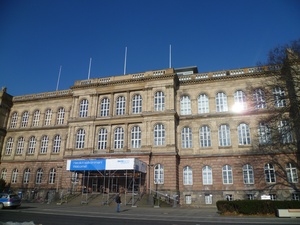 Front of the Hauptgebäude, Bistro can be accessed from outside at the right side east side of the building (right)

Hauptgebäude ("main building") is the original core of the university and was build at the end of the 19th century. Several lecture halls, mostly used by the math and engineering faculties, are located within the Hauptgebäude. A large lecture hall, often used for representative events, Aula or also called  AachenerMünchener Halle is inside Hauptgebäude.

For unknown reasons the lecture halls I, III and IV are on the first floor, while II and V are located on the second floor.

There is no study rooms in Hauptgebäude, even though there might be open and unoccupied lecture halls in it.

SuperC is right next to Hauptgebäude.