This typical German vernacular building, characteristically sited with its gable end to the street, was built in the 1850s on land originally granted to Joseph Renfrey.  The upper storey, with its high pitched, half-hipped roof and attic windows, was probably the original living quarters.

In the 1860s watchmaker August Christoph was the first registered owner.  It later became a cobbler's shop and for sometime shared the premises with a dressmaker.  The shop has changed little since the 1920s when it became the village delicatessen, established by Olive Post, and later a sweets shop owned by her daughter, Betty Gleggett.  Currenty it is Kaffeehaus Fine Foods

This quaint old shop caught my attention on my first visit to Walter Wotzke’s Hahndorf Gallery which stood over the road in the former Lutheran school built in 1871.  Barely out of my student days at the South Australian School of Art, I was due to exhibit there with a group of fellow Estonian artists in 1963.  The prospect of putting one’s art on public show was akin, in my greenhorn’s mind, to parading naked down Rundle Street.  The worry of it all was a little relieved when Walter kindly escorted me over the road to this shop to buy chocolate bars and Coca Cola.

Behind the counter in the dim interior was a small, bird-like woman with winged glasses on a friendly face.  Betty Cleggett was the eyes and ears of Hahndorf, a sort of unofficial social worker exuding warmth and interest in her customers while she counted out the jelly beans.  She had continued in her mother’s footsteps by providing a ready ear for the youth of the village congregating daily on the shop’s verandah.  A few years later my own children became keen patrons of this place with its 19th Century cedar counter decked out with a glass display case full of chocolate bars backed by shelves of multi-coloured sweets in jars.  Everything except for the drinks refrigerator was small in scale and somehow, comforting.

Next door was a field that had been vacant in living memory except for the occasional sheep and swathes of sweet smelling jonquils in Winter.  Sadly, Betty died just before Christmas in 1994.  Otto Sames undertook a substantial renovation programme of the shop in preparation for its use as an outlet for Otto’s Bakery.  The interior was redesigned and a damp course installed.  The open field next door was sold and soon sprouted two new shops.  Another physical link with Hahndorf’s past as a farming community was thus severed.

The place we referred to as “Aunty Bet’s” was built as a shop with living quarters above, by the watchmaker August Christoph and his wife Louise.  They lived in Adelaide upon arrival in the colony in 1849.  August left his pregnant wife to fend for herself while he tried his luck at the Bendigo goldfields in Victoria.  His good fortune brought the family to Hahndorf where they bought this block of land from Mr. Paech in 1861.  When the eldest daughter completed her schooling at the Hahndorf Academy, she trained as a dressmaker and shared her father’s workshop on the ground floor.

After the Christoph family sold the property in 1893, there were a succession of owners, including Mr. Drute the bootmaker who took over in 1898.  He made and repaired leather boots and shoes.  Considered too expensive to be worn while working out in the fields, they were replaced by clogs fashioned from willow wood with a wide leather strap across the instep.  They kept the feet dry.  Such industry was a far cry from lollies and soft drink, coffee and cake, but illustrates how an old building erected for a particular purpose can be adapted for other uses.  Today, the willows planted as a supply of materials for making baskets, clogs and cricket bats are considered an environmental menace in the Adelaide Hills Water Catchment Area. 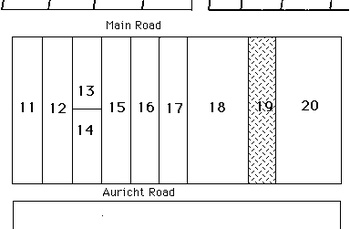