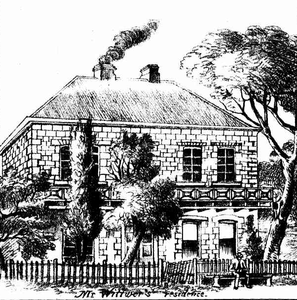 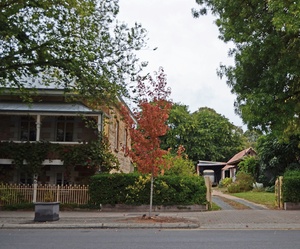 Entrance to Gay Von Doussa's property 2013  [photo: John Buchan]This imposing two-storey residence was constructed for the local miller, F.W. Wittwer, who occupied a leading position in local business and society.  To possess the skill to operate a mill was a great advantage in the early days and many millers prospered.  The Wittwer family was no exception and so in 1861 they built this grand two storey building opposite the mill which had been the means of their good fortune.

In 1923, Brother and sister Wilhelm Jaensch and Martha Jaensch purchased the property which they named "Hovea".  In 1967 the house was bought by the Von Doussa family who named it “Detmold” after the town in Germany from which they originated.

In the late 1850's, FW Wittwer jun. built this imposing stone house.  It was a radical departure in style and size for homes in Hahndorf.  It was, however, built on low-lying ground - the village duckpond as one person put it - which was to cause problems for its residents in later years as water often entered the home during periods of heavy rainfall.  Over the years the original shingle roof has been replaced by iron and the balcony verandah added.  This building has always been used as a private residence.  The grounds feature a fine old barn and a large spreading oak tree.