Boise, a thriving city in the Northwest of about 200,000, is best seen and understood by a tour of its five local breweries. Each brewery is located in a unique part of town that demonstrates the contrasting existence that is possible for Boiseans to enjoy. 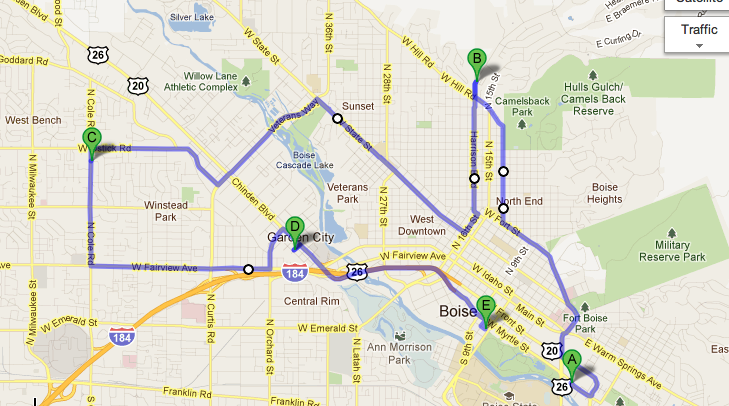 Beginning our tour at the Ram Restaurant & Brewery, located at 709 East Parkcenter Boulevard, we enjoy a nice beer on the patio by the Boise river. As I sip away at my “Total Disorder Porter,” a chocolaty-delicious dark beer, realization sets in as to how lucky we Boiseans are to have such a feature as the Boise River at our expense. From rafting to bridge jumping to fly fishing, it’s possible to connect with nature right in town throughout the year. The Ram is also very close to Boise State University, a growing national university of about 20,000 and a significant element of life in Boise for many.

Leaving the Ram, and heading through Boise on Fort Street, we get out of the business and University district of town and into the quiet slow-paced part of town known locally as the “North End.” Taking Fort until turning right on 13th Street, we pass North Junior High and eventually make way through Boise’s historic Hyde Park District. This aesthetic district, now featuring numerous high restaurants and stores, was Boise’s first suburban shopping area and was listed on the Register of Historic places in 1982. Proceeding through the district we pass the notable Camel’s Back Park, a perfect place to hike off the buzz from the Ram by taking a quick jaunt up the unique ridge-like feature in the park. Getting back in the car for just a few minutes, we finally turn right on Bogus Basin Road and make it to our second local brewery.

Highlands Hollow Brewhouse, located at 2455 Highlands Hollow, has been brewing beer and serving tasty food to Boiseans for more than twenty years. Taking a look at their expanse of beers, I end up opting for the “Lone Pine,” a pale ale significantly lighter than my previous beer. Enjoying the cold and hoppy brew, I begin to think about what a significant location Highlands Hollow is. The brewery attracts all types of people as it is on the way to and from the local ski hill and near the populous North End. A large communal fireplace is located right in the center of the brewery and the walls are tattered with local memorabilia and retro skiing photos. This place is truly and uniquely Boise.

Stepping out of the brewery on the beautiful late October day, we decide to head to our next brewery by way of the Harrison Boulevard. The picture-perfect street, named after President Benjamin Harrison, is the perfect place to see the changing colors fall brings. As Boise became further established in the early 20th century, Boise’s wealthiest residents built their houses on Harrison Boulevard. The street’s jaw-dropping homes offer present day Boiseans a chance to vicariously experience the lives of 20th century Boise Gentry.

Taking a right onto State Street, Boise’s original suburban expansion starts to become apparent. The buildings appear increasingly dated and unfortunately, somewhat un-cared for. A variety of used-car lots coincide with a plethora of fast food restaurants that serve to distinguish this as a less-than-ideal Boise experience.

However, as we continue and eventually turn left to head up Veteran’s Memorial Parkway, we pass Veteran’s Park nestled on the Boise River. This huge park demonstrates Boise’s commitment to honoring Veterans of War and is located on Boise’s Greenbelt and features a large fishing pond and is another great spot to spend a day in Boise. Without ever leaving the park it would be possible to catch a fish, run, take a nap, enjoy the playground, and go for a swim in a matter of a couple hours.

We eventually make our way up Veterans Hill, turning right on Ustick Street, proceed to cruise through some of Boise’s original suburban areas, and finally turn left on Cole Road to find ourselves at Boise’s next brewery. Boise’s original suburban sprawl combines with dated retail stores and business complexes that surround Boise’s Sockeye Grill & Brewery at 3019 North Cole Road.

Sockeye, open since 2001, has a reputation for brewing some of the best local beer in Boise. Many bars around the valley feature their acclaimed “Dagger Falls,” a delightfully hoppy India Pale Ale. Since I’ve had the Dagger Falls brew before, I decide to try something new and go for a “Hell Diver,” a Pale Ale style beer. Great beer combines with a neighborhood type feel in this brewery, much comparable to the vibe from Highlands Hollow. However, the part of town Sockeye is located in distinguishes it differently than Highlands Hollow. Rather than a mesh of cultures coming together to enjoy Sockeye’s great brews, this brewery seems to be frequented by more of a suburban crowd, due to its location that nearly skirts Boise’s city limits.

After enjoying both the “Hell Diver” and the “Dagger Falls” brews, we head out yet again for our next stop along the Boise Brewery Tour. Heading south on Cole Road through the “80’s-esque” suburban and business area, we eventually turn left at the busy intersection of Cole and Fairview Avenue. Fairview is an absolutely quintessential street in Boise, as it is home to about everything the valley has to offer. From ethnic food, pawn shops, big-box stores, and even a hookah bar, a drive down Fairview avenue is not to be missed.

Following the near sensory overload from Fairview Avenue, we take a left at the intersection of Fairview and Orchard Street, and head down the hill to turn right Chinden Road, in what is known as Garden City. Garden City, now considered to be the center of all things shady in the Boise area, was once the area that Chinese immigrants lived in. Now Chinden resembles an area of abandoned factories, warehouses, and shady bars that have seen better days.

Arriving at our next stop, the newly opened Payette Brewing Company located at 111 West 33rd Street, I can’t wait to take a sip of hopefully another great beer. PBC opened their doors in May, and this is my first trip to the brewery. Heading in, I’m surprised to find the renovated interior to be much more aesthetic than the exterior suggested. Opting for an “Outlaw IPA,” I could not be more satisfied. After my beer, I conclude Payette Brewing Company to be a unique gem in Garden City, much more deserving than the typical reputation other Chinden bars receive.

As we head out to continue the tour and turn right on Chinden, I take even more note of the outdated vibe Chinden Road puts off. It appears Chinden was once the center of business in Boise, however things definitely changed as the city continued to expand in all directions. We opt to take the Connector and experience a taste of Boise’s convenient highway system. Passing over the Boise River at blazing fifty-five miles per hour with a great view of downtown in sight, this beautiful fall day seems absolutely perfect. We follow the connector until its end, and take Myrtle until we reach our next stop.

Finally we connclude our tour at Table Rock Brewpub, located at 705 West Fulton Street, back near the heart of Downtown Boise. Staggering into the brewery after my sober designated driver, I am amazed to learn that the brewery has been open since 1991, as it seems resemblent of a much more recent opening. Offering nine beers on tap, I decide on the “Hophead IPA Version 2.0.” Immediately upon first taste, I am blown away at how absolutely delicious this beer is. Hoppy, citrusy, bitter, and sweet all at the same time.

Ending the tour of Boise on this note could not have pleased me more, as it seems this beer is simply the icing on the cake. Through a tour of Boise’s local Breweries, all highly recommended, it’s possible to experience the many different sides of life that the city has to offer. From the area near the University, to the North End, areas evidencing Boise’s boom in the past, and ending in downtown, this tour offers all of the great parts of Boise with supreme benefits of locally-crafted brews.

DISCLAIMER: FOR SAFETY REASONS, THIS TOUR WAS NOT DONE IN ONE DAY.