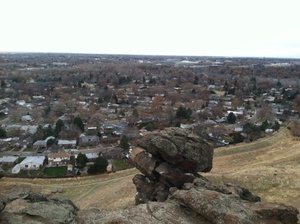 View from the top of Eagle Rock

What is Castle Rock Reserve?:

The entire Reserve is 48.5 acres in total, but the area is recognized and known for the grouping of rocks—called Eagle Rock by the native tribes—that project from a hill behind Quarry View Park. The area is located near the Old Penitentiary, and from atop this grouping of rocks one can look out over the Boise Valley.

Long ago Castle Rock Reserve was a sacred place for healing and rituals, as well as a burial ground for the Shoshone, Bannock, and Paiute tribes. It has been many years since the tribes occupied the Boise River Valley, but Castle Rock still holds significance for their descendants.

One reason this area was so special to the natives peoples, is that Hot springs used to flow down the sides of the hill, and these sacred pools were used for spiritual and medicinal purposes. 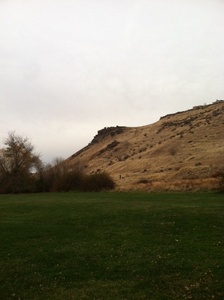 In 1864, the Southwestern Shoshone agreed to sell their land under the Boise and Bruneau treaty. Unsurprisingly, the treaty was not honored and the native people were not fully compensated for giving up their land. However, the descendents of these peoples still fight today to preserve the area. In 1990, the East End Neighborhood Association (EENA) got together with the Native American Tribes and began a movement to save the area from being developed.

Enough funds were raised by the movement to buy the land from the developer, and so began a process of healing for the sacred healing place. Hiking and bike trails were relocated so as not to desecrate certain burial places, and Boise City reintroduced 3000 native plants to the area. Castle Rock Reserve is still a special place for descendents of Boise’s native tribes to go and worship. The preservation of their sacred place represents the preservation of their culture and their heritage.

A woman named Betty Foster has been an important player in the fight to preserve Castle Rock and spread awareness about the spiritual and historical significance of the site. Perhaps most importantly, she helped raise most of the funds to place a stone at the base of the hill under Eagle Rock, to inform visitors of the sanctity of the place and ask them to “tread lightly”. After the rock was installed, Betty’s claimed her new goal was to have the trails that run through the reserve renamed after the native tribes that inhabited the area.

While the area is still preserved and respected, it now includes Castle Rock Loop, a trail that circles the reserve and is conducive to mountain biking and hiking. Click HERE to find information on the trail.