In 1962, the City of Boise hired a consultant, Atkinson & Associates, to create Boise's first comprehensive plan. The plan suggested the city should acquire land along the Boise River to create a continuous "green belt" of public lands stretching the entire length of the community. A local grassroots effort to clean up the waterway and create public access to the river corridor began to take hold. This vision caught on, and by 1967 three small parcels of land were donated to the city to launch the "green belt."

In 1968, with public interest and support growing, the first Greenbelt Plan and Guidelines were adopted by the Board of Parks Commissioners. A Greenbelt and Pathways Committee was appointed in 1969 to guide the City of Boise as it worked to develop the Greenbelt, and in 1971 the first Greenbelt Ordinance was adopted which required a minimum setback of 70 feet (21 m) for all structures and parking areas. The City of Boise continued to slowly piece together a patchwork of land along the corridor using several methods of acquisition including purchase, exchange, leasing and receiving donations of property by individuals, civic groups and corporations.

Today, the Greenbelt is a popular place for the citizens of Boise to ride a bike, go for a run or walk, or rollerblade.

Learn more about the Boise Greenbelt by visiting http://www.cityofboise.org/Departments/Parks/ParksAndFacilities/Parks/page18151.aspx

Here is a map of the Boise Greenbelt. 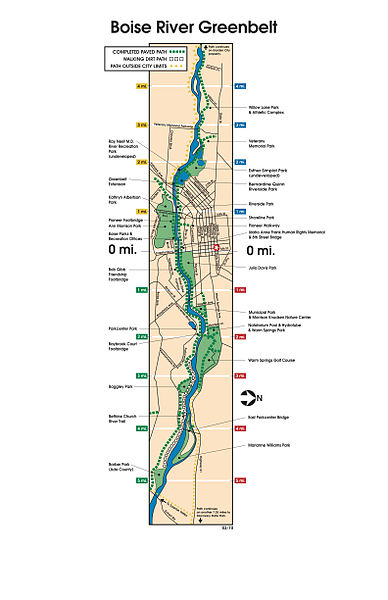