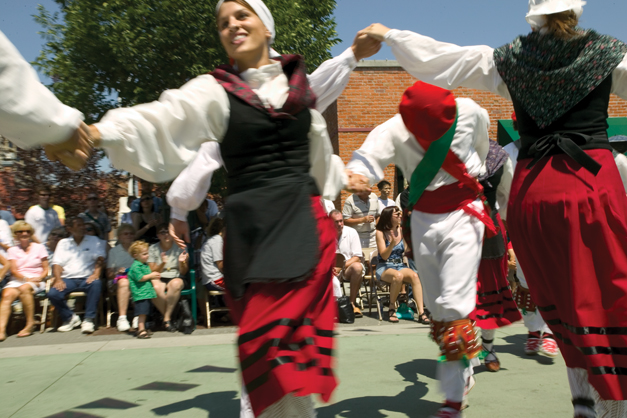 Jaialdi refers to a festival in the Basque Language (Euskara). This festival exhibits the Basque culture with dancing (dantzan) and musical (musika) performances, sporting (kirol) events, and authentic food (jateko) and drink (edateko). The Basque people are known for their merriment, and Jaialdi showcases these characteristics well.

Jaialdi was first celebrated in 1987 at the Old Idaho State Penitentiary as a one time weekend event to educate the public about the Basque culture. Jaialdi ‘87 attracted approximately 30,000 visitors who thoroughly enjoyed the event, the location, and the opportunity to be part of the Basque activities. The festival was so popular that Governor Cecil Andrus asked the local Basque community to put on another celebration to help celebrate Idaho’s Centennial in 1990.

After Jaialdi ’90, it was decided that the Jailaldi would continue to be held in Boise every five years on a rotational basis with four other Basque clubs throughout the United States. Jaialdi has been held in Boise in: 1987, 1990, 1995, 2000, 2005, 2010 and the 2015 is being planned. Jaialdi has become so popular that the event had to be moved from the Old Idaho State Penitentiary to the Western Idaho Fairgrounds to accommodate over 40,000 guests. This event is always held on the last weekend of July, which coincides with the Basque community of Boise’s celebration of their patron saint, San Ignacio of Loyola.

"Eat, Drink, and be Basque"