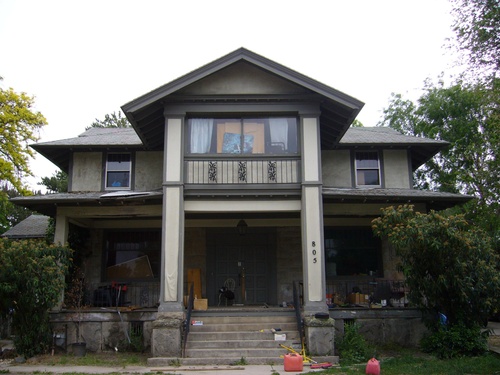 If you have lived in Boise, especially southeast Boise, for a considerable amount of time you have most likely heard of the “Murder House”. Linden Street in southeast Boise, off the I-84 exit 54, is mostly a beautiful tree-lined street with well-kept homes—except for the house at the corner of Linden and Leadville. The house, a large craftsman style built in 1910, is the subject of many grandiose urban legends.[1] Rumors range from a crazed murderer who killed and dismembered numerous people in the house, to the house being a fraternity house for Boise State University—with fraternity members telling of blood dripping from the basement walls—to the ghostly apparition of a woman in 19th century clothes staring out the front window at night. The latter is a matter of personal belief, but the first rumor mentioned does have some truth to it—kind of like one of those horror flicks that claim to be true by stating the film is “adapted” from true events. The whole fraternity house legend is a complete farce.

Regardless of the rumors, the truth of what happened at 805 Linden Street is probably one of Boise’s most grotesque murder cases. Court documents state that on the night of June 30, 1987 an altercation broke out between three men: Preston Murr, Daron Cox, and Daniel Rodgers—the owner of 805 Linden.[2]  Preston Murr was shot in the shoulder as a result of the altercation. Attempting to flee, Murr ran to a nearby house and pleaded at the door for help, but before anyone opened the door Rogers and Cox retrieved Murr and dragged him back into Rogers’s house. Once inside, Murr was fatally shot by a bullet to the brain.[3] Soon after the shooting the nearby neighbor—the owner of the house Murr ran to for help—phoned police and reported the suspicious activity, however the police did not respond promptly and the neighbor went to bed.

Having murdered Murr, Rogers and Cox dismembered his body and placed the pieces into plastic bags. The bags were then placed into the trunk of a car and Rogers and Cox drove to Brownlee Reservoir, near Weiser, Idaho, to dump the body parts. The remaining evidence—gloves and the plastic bags—were thrown into a dumpster behind a Meridian, Idaho convenience store.[4]

In the morning police responded—after a second call by the concerned neighbor—and discovered bloodstains on the street and several neighboring doors, they attempted to contact residents inside 805 Linden, but after no response they received a search warrant and discovered the crime scene. Cox and Rogers were apprehended and charged with murder.[5] After complying with police and giving a detailed account of the incident Cox was given a lesser sentence—accomplice to murder—of which he served six years.[6] Rogers, being found guilty of murder, is currently serving a fixed life sentence at the Idaho Correctional Center; he was denied parole most recently in 2005.[7]