The Flicks is an independent movie theater located in downtown Boise on Fulton Street. The Flicks is quaint with four screens that hold 192, 96, 55 and 45 people respectively. Additionally the popular establishment has a wonderful café (with a fireplace!), a conference room, an outdoors patio that also has seating, as well as a fantastic video rental shop. The rental shop is a GREAT alternative to those pesky Red Boxes. They have an expansive collection and always have the brand new releases.

The Flicks first opened its doors in 1984 with the leadership of Carole and Rick Skinner. Originally the theater only had one screen, a café and patio. In 1988 a second screen was added and in 1997 a third and fourth were also added. It was not until 1989 that the rental shop opened. They have weathered the storm of big box multiplexes that have cropped up around the area. The Boise community has continually enjoyed The Flicks for the past 27 years.

Just wait, it gets better, at The Flicks they serve beer and wine to those over 21. Yep, they treat you like an adult and allow you to enjoy a beverage on the patio, in the café and even in the theater.

For its contribution to the Boise community and culture, The Flicks has been honored with a number of awards. It was voted "Best Place to Watch a Movie in Boise" too many times to count. Also The Flicks was honored with "The Mayor's Award for Excellence in the Arts" in 1997. In 1991, 1994, 1996 and 2001 its was awarded "The Elm Award" from the gay community as a supportive, non-gay business. And to round out its achievements it was Carole Skinner, president and part owner of the establishment, was awarded the "United Vision for Idaho's Most Progressive Businessperson of the Year Award" 2002 and the "Teevee Award" from Idaho's Public Access Television Station in 2009.

The Flicks is also a prominent member of the "Think Boise First" movement.

The Flicks is a great place for date and a perfect place to escape the summer heat, so be sure to check it out!

For a full look at what is playing, the café menu, and the video store be sure to look at The Flick's website....http://www.theflicksboise.com/ 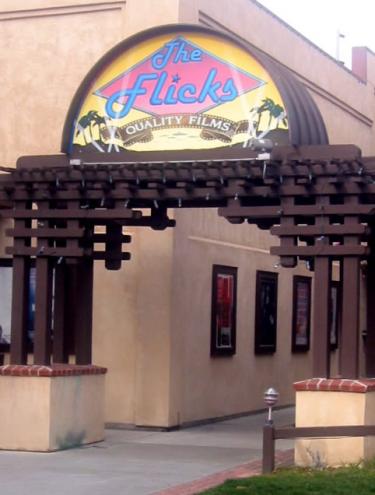