Ustick was an independent town site, and is named after Harlan P. Ustick. Dr. Ustick owned the third largest apple orchard in the valley. The dams at Arrowrock and Lucky Peak created the irrigation water that allowed the Ustick area to be productive. Suburban development after WWII encroached on Ustick, and by 1970 Ustick Road was a major west-east transportation corridor. The road continues to be widened today, and leads straight to suburban hell. 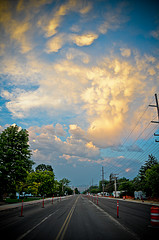 Orange cones lining Ustick Road as it gets ever wider for commuters. Photo by Danny, and used under a Creative Commons license.

Have you visited the original Ustick Village?