What do you know about The Akron Ale House? 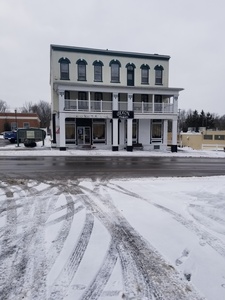 The Akron Ale House is a restaurant/bar located in Akron, NY.  The Ale house is open for lunch and dinner Monday through Saturday beginning at 11 am. and closed Sunday. At the Ale House customers can expect a wide variety of food choices that embrace quantity in the proportions that will not leave you walking out hungry. While in Akron visitors may also want to check out the beautiful Akron Falls which is only a short two minute drive.

The Akron Ale House has a rich history the dates all the way back to 1836. The building was originally created to be a general store built by Charles Rich. The store remained open until 1871. Following a fire in 1871, the three-story structure that stands today was created and dubbed “The American Hotel”.  It’s said that the Mayor of Buffalo, Grover Cleveland, would frequent the establishment in order to escape from what was a very tumultuous political time in Buffalo’s history. The future president owned a shop in the village and was considered a part-time resident until his departure to Washington.