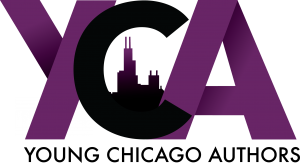 "Young Chicago Authors transforms the lives of young people by cultivating their voices through writing, publication, and performance education."

Through workshops, competitions, programs and in-school residencies, YCA has been providing exposure to creative writing for young people since 1991. With a core small staff, educators, and fantastic teaching artists leading the way, YCA is able to provide these opportunities for free, "directly serv[ing] 4,500 teens a year" and "10,000 young people and adults through readership of its publications and audiences at its events."

Louder Than A Bomb:

Young Chicago Authors is perhaps best known for its annual month-long performance competition Louder Than A Bomb (LTAB), which averages over 5,000 lucky audience members. The festival, founded by Kevin Coval in 2001, is the largest youth poetry festival in the world. It was created "to give youth around the city  of Chicago a platform to share their stories" and has since "become a 'bridge' for young people from many different backgrounds to come together and find a common ground through their narratives."

You can learn more about the festival here, volunteer for it here, and follow along with 2014's festival on Twitter with #LTAB2014. LTAB 2014 was featured on CBS News on March 16, as well.

Additionally, Oprah featured the LTAB Documentary on her OWN network and a YCA teaching artist, Malcolm London, has been featured on NPR and TED Talks for his poetry about growing up and living in Chicago (and it's awesome. Seriously, watch him perform "High School Training Ground" on TED Talks and/or read the transcript of the poem here).