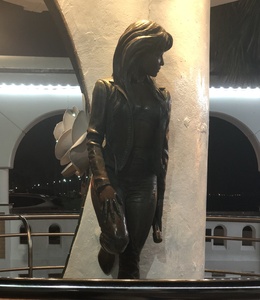 Two years after Selena’s Murder, sculptor, H.W. Tatum, molded a life size bronze statue of Selena. Selena is wearing a leather jacket and holding a microphone while looking over Corpus Christi Bay. The monument is located in Downtown Corpus Christi, Texas only a few miles away from her burial site. The sculpture was made to honor Selena’s success and impact on the world. When visiting the site, one of her hit songs, “Como la Flor” is playing all hours of the day. Along with a giant white rose, is a plaque stating,

Selena was referred to as La Flor (The Flower) and identified with La Rosa Blanca (The White Rose). When you view La Rosa Blanca, you feel her presence nearby.

Yet her persona enriched the lives of those she touched

And her music lives on.”

Selena was born in Lake Jackson, Texas and later moved to Corpus Christi, Texas with her family. She grew up around music, it shaped who she was, and later in life inspired millions of people as well. Her father was a musician and by nine years old she was the lead singer of her family’s band, Selena y los Dinos. They would perform locally at restaurants, weddings, and other events. Although, her first language was English, her father taught her to sing in Spanish. This was so she was able to connect more with Latino communities, as well as Tejano. Not only was she loved by Latino cultures, but all over the world.

During this time, successful Tejano artists were mainly men. Many people doubted Selena’s ability to make a career out of music being a young woman. Selena proved everyone wrong, she was determined. At only 15 years old, she won Performer of the Year and Best Female Vocalist at the Tejano Music Awards. Her music inspired people. She redefined Latin music and broke through barriers.

Selena’s carrier took off in 1990 when she released her first album “Ven Conmigo”. She was known as La Flor (The Flower), Mexican Madonna, and the “Queen of Tejano”.  Her style, voice, and charismatic personality was admired by people all around the world.

Selena not only loved music but was determined to help make the world a better place. She used her fame to inspire kids and people who looked up to her. Later in life, she continued her education by going back to school for business. She would visit neighboring schools and encourage students to stay in school and steer away from drugs and alcohol. She encouraged them to follow their dreams and not listen to the doubt from others.

In 1993, Selena won a Grammy, Best Mexican American Album, for her album “Selena Live!” Selena later on then began launched a clothing line and a salon. She was an iconic figure in people’s lives. Children and adults looked up to her for guidance and inspiration.

According to “Texas Women’s Hall of Fame”, Selena was working on a new album before she was killed “Dreaming of You”. It was an album in English that was later released a few months after her death. This album was the “best-selling Latin album of all time, debuting at No. 1 on the Billboard 200 chart and selling 175,000 copies on its very first day of release.

In 1995, Selena was murdered at only 23 years old, by Yolanda Saldivar. She was not only the founder of Selena’s fan club, but her manager as well. Selena had discovered that Saldivar was embezzling money. When confronting her, she was shot. Yolanda continues to claim that it was an accident but is serving a life sentence in prison.

Even after her death she continued to win multiple music awards and inspiring artists to this day.  Selena Quintanilla-Perez influenced many people throughout her life and even after death. Many people looked up to her and were inspired by her kindness, strength, and the way she was able to break through barriers. She was influenced by Madonna, Michael Jackson, and many more artists.

Even her birthday is now considered a national holiday.

Thousands of people from all over the world come to this monument to visit Selena and to remember the artist that impacted the world.