This article gives the history of Corvallis from an LGBT+ lens, diving into local laws, organizations, and individual activists & experts.

Laws affecting queer individuals in Corvallis were mostly anti-gay laws, a few of which were sponsored by the Oregon Citizen’s Alliance. They tried to pass a series of laws encouraging the government to show disapproval of homosexuality, both through public spending and through public education.

Various activists and experts involved with the queer community of Corvallis are also involved with OSU and/or their queer studies programs. Multiple experts are involved in preserving and adding information to queer history archives at OSU or on their own personal blogs.

Capture of activists rallying against measure 9 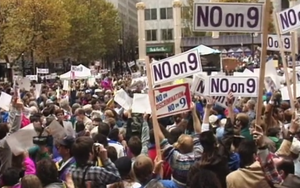 Co-founded by Karuna Neustadt, this organization was created in response to ballot measure 8 of 1988. A group of women got together to work to improve the conditions for queer individuals through political activism.

PFLAG (Parents, Families, and Friends of Lesbians and Gays) became a membership organization in 1993. It is unclear when exactly the Corvallis/Albany chapter was created. This organization is a support group that allows local LGBT+ individuals and their families/allies to connect with and support one another.

Previously titled the “Queer Resource Center”, the Pride Center was originally just a space in the Women’s Center in 2000. In 2001 it got the funding it needed to become its own center. The center expanded over time and was eventually moved to its own building in 2004, the same year it switched to “The Pride Center”. This organization functions as a safe space for LGBT+ students, as well as provides resources like a library of queer works and a gender-neutral bathroom. The staff at the center are trained to provide support for LGBT+ individuals in need. 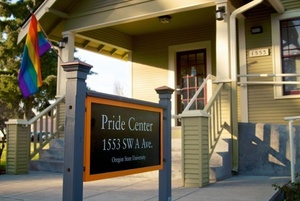 PRIDE Corvallis organizes events with the goal of uniting the local LGBT+ community, such as meetings, potlucks, and pride celebrations.

They are a non-profit organization that meets the first Friday of every month. They often host fundraisers to raise money for other LGBT+ themed organizations.

This women's choir was founded by Betty Busch in response to Measure 9 as a celebration of it being voted down. Busch stated "There was a kind of jubilance about that (vote)".  She formed a lesbian choir because she was "looking for a more positive way to form community in Corvallis".

Kraemer contributed to the preservation of queer history in Corvallis, and specifically at OSU. He started a blog dedicated to helping him preserve this history, tackling subjects such as “History of gay student groups at Oregon State University” and “Gay lifestyles at Oregon 'Straight' 1984”.

Co-founder of After 8, Neustadt was involved in political activism to improve the treatment and lives of gays and lesbians in Benton County.

Dharma Mirza is a trans-woman and drag queen in Corvallis. Mirza founded Haus of Dharma, a local organization and drag show community. She uses her drag to promote political awareness and support for trans individuals. She also promotes awareness of the way that trans people are viewed by the drag community and how she believes that it can be transphobic.

Professor Driskill is a faculty member at OSU who is involved with the queer community. They have been involved in creating the curriculum for Queer Studies programs at OSU, and they are in the process of researching more of the queer history at OSU and in Corvallis.

Fernández is the co-founder of the OSU Queer Archives, a set of archives within the OSU library that documents queer history within the college and within Corvallis. She and Bradley Boovy founded these archives in 2014 and are still working to add to them.

Boovy is the other co-founder of the OSU Queer Archives, along with being a professor of German and Women, Gender, & Sexuality studies. He studies the history of sexuality at OSU.

“Neighbors We Are, on Opposite Sides.” Corvallis Gazette-Times (OR), 2000.