The Happy Wall represents the physical manifestation of Denmark's creativity and happiness. Since Denmark claimed the title of "Happiest Country in the World" according to Forbes Magazine, it is no surprise that this innate joy would soon express itself in the public sphere through artistic expression and human connection. 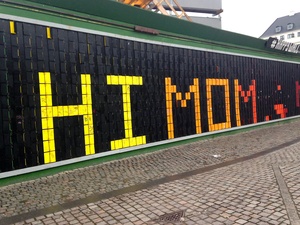 A personal message on the Happy Wall

The Happy Wall is an interactive pixel structure in which visitors may manipulate tiles to create words and pictures. It was built from  the remnants of Tuborg’s cinema tribune, and today sits in a large cobblestone square near Copenhagen's famous Nyhavn docks.1  The project was conceived and executed by Danish artist/musician Thomas Dambo at the 2013 Roskilde Music Festival.2

The wall itself is about 100 feet long and consists of about 2000 wooden boards; the boards can be flipped to change to various colors and form infinite combinations.3 There is even a sliding ladder to help shorter visitors reach the uppermost tiles. The Danish government commissioned the wall to disguise a large fence concealing the construction of a new station on Copenhagen's Metro line.4

The Happy Wall's "happiness" derives from several factors. First, its bright colors pop against Copenhagen's gray winter days. Second, it's simple and fun to play with! Anyone can easily maneuver the tiles into their name, a shape, or even a phrase (shown above). But the extra factor that makes the Happy Wall so exciting for passersby is the feeling that it's a "happy accident", the type of art piece that one stumbles upon perhaps while in a hurry to somewhere else. According to Dambo's website, "the Happy Wall gives anyone a voice and opportunity to make a huge artwork or statement in the middle of Copenhagen."1  And since the square next to Nyhavn has such high foot traffic, the rest of the Happy Wall's beauty comes in its spontaneity and constant change: you'll never see the same wall twice.

At the beginning of February 2015, the hashtag #HappyWall had well over 6,000 mentions on Instagram.5 In addition, the Ukraine's Euro Vision team used the Happy Wall for a recent promotion video, and it was once shown in a Russian newspaper after a Russian tourist flipped the tiles to spell "Putin is a prick."1

Although the Happy Wall does not serve a specific civic purpose other than a public meeting space and soon-to-be new Metro station, it does show a new and unique dimension of Denmark's society. The Danish government is willing to create investments in the arts in an effort to keep Denmark the "Happiest Country in the World"--and so far, it seems to be working.