Agritopia is a 166 acre mixed use planned community located in Gilbert Arizona. The “heart” of agritopia is a certified organic farm which spans across 11 acres. The other 155 acres are sectionalized for restaurants, shops, and different housing communities. Agritopia was originally founded in 1927 and was originally a homestead owned by the Reber family. In the year 1960, Jim Johnston purchased the land and converted it into a farm in which Jim, his wife Virginia, and his three boys, Steve, Paul, and Joe attended to the farm growing cotton.

In 1998, Joe Johnston, Jim Johnston’s son, entered into an agreement in which he would sell portions of his land to build houses for the rapidly increasing Gilbert population. Pressured by the increasing population and the planned expansion of the loop 202. Johnston foresaw that farming was not apart of his future as the area around him was becoming more modern.

In 1999 the Joe Johnston came to realization of what he wanted to do with his remaining land, as the Johnston family had been selling off portions of its farm to developers. Wanting to honor the area’s agricultural heritage Johnston began by creating a neighborhood reflective of the Midwestern small towns that are the heart of their agricultural landscapes. Though sad about losing that heritage, Johnston strongly believed that the project that was going to become Agritopia. Johnston also believed Agritopia could provide for the sharing of common amenities, reduce materialism, and focus on pedestrians—all while honoring agriculture by providing access to pastures, gardens, and orchards to the community to inspire a love for agriculture and the environment. While in 2001 construction of what Agritopia is now began. The construction of Agritopia faced many issues. The biggest being the zoning ordinance in place in Gilbert had to be completely redone. Only 3 years after construction of Agritopia began, In 2004 at the summit of Agritopia’s construction, Gilbert was currently the fastest growing municipality of more than 100,000 people in the U.S., according to the U.S. Census Bureau. The Johnston family still currently resides in Agritopia.

Agritopia is extremely important to the Gilbert area as it is plays a large part in the social life of many of the community members outside of agritopia. Agritopia can be looked at as a model society and what some would call and “experiment”. Agritopia gets its name from the combination of the two words agriculture and utopia. When entering Agritopia it is similar to entering a different part of the world as the environment more closely resembles California than Arizona. 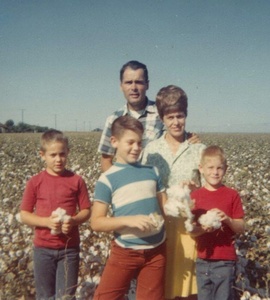 Agritopia encourages a “barrier-free” lifestyle, in which houses and neighborhoods are designed in specific ways to encourage interaction between neighbors. Agritopia contains 452 lots sectionalized for housing. These houses all take substantial stylistic cues New Urbanism houses which were popularized in the early 20th century. Multiple parks, shorter fences, front porches, and many conveniently located shady lounge spots contribute to the “barrier free lifestyle”. Located among the neighborhoods is “Generations” a senior living community which offers a resort like living experience. Also located on the premise of Agritopia is the Gilbert Christian School Agritopia campus. The campus contains classes including pre-kindergarten through 8th grade. 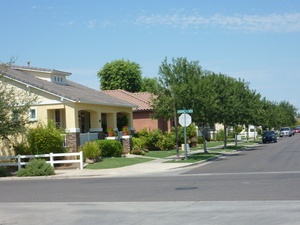 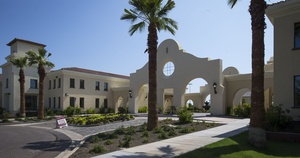 Agritopia is most famous for its community farm.The Farm is an 11 acre certified organic urban farm where seasonal fruits, vegetables, and nuts are the main focus. Honey, peaches, kale, grapes, and carrots are all things that can be found growing on The farm. The farm also has an area called community farm where the residents of the community can lease 20x20 plots yearly. On location is also The Farm Store, the farm store is a self service store where fresh organic produce grown at agritopia is put up for sale. 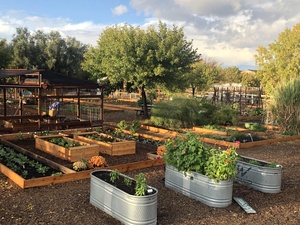 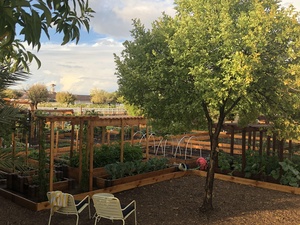 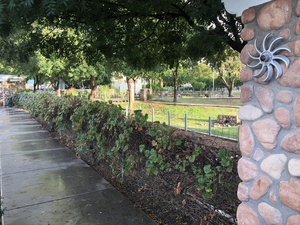 Walkway near The Farm

Joe’s Farm Grill was originally the Johnstons family residence built in 1966 the dining room being the original living room, bedrooms removed and replaced by the kitchen, and original kitchen and dining room removed to become the atrium. Joe’s Farm Grill is a diner open 7 days a week, focusing on many different types of comfort food. Utilizing fresh ingredients grown on the farms of agritopia, and locally sourced meat. Joe’s Farm Grill was featured on an episode of the Food Network's Diners, Drive-ins, and Dives. Find that episode here. 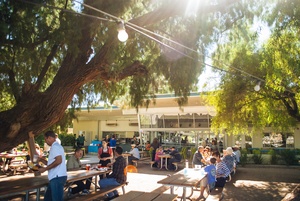 The Coffee Shop was opened in 2006 and is Co-owned by the Cuff and Flowers families. Featuring dozens of freshly brewed cold and hot espresso beverages as the main focus. The Coffee Shop also serves many different, breakfast, lunch, and brunch items accompanied by freshly baked pastries. The Coffee Shop was featured on an episode of the Food Network's “Cupcake Wars”. Find that episode here. 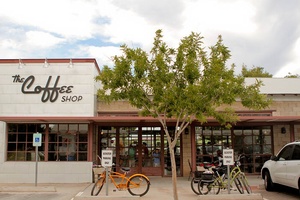 The Barnone featured Agritopia is a is a community for skilled craftsmen to make and sell their handcrafted goods. There, visitors will find twelve of Arizona's best makers, ranging from woodworkers to experimental winemakers, restaurateurs and more. The Barnmore also has weekly events and different classes put on weekly where different “makers” that are featured. The Barnmore also has daily wine tasting put on by experimental wine makers Garage-East. 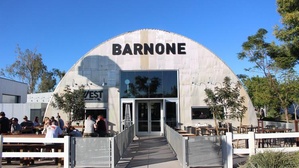 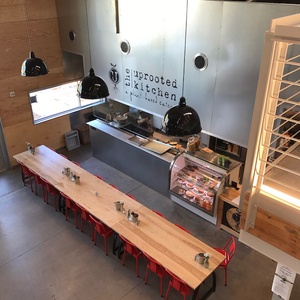